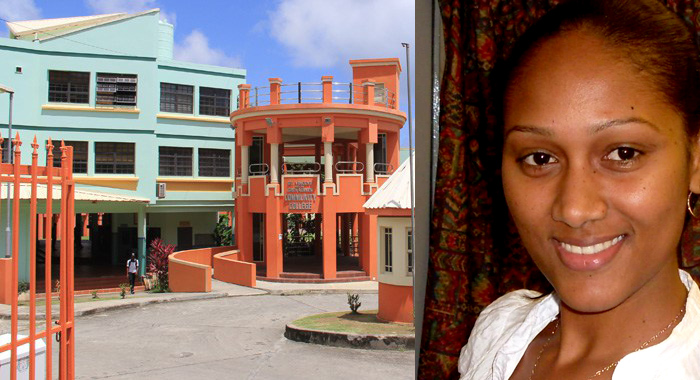 Akeila Browne, right, has been transferred from an administrative to lecturer position at the Community College.

The union said that it is “deeply aggrieved and expresses its outrage” over the SVGCC’s decision to transfer Akelia Browne from the post of Assistant Registrar-Quality Assurance and Examinations, to that of a lecturer at the Division of Technical and Vocational Education at Arnos vale.

In a statement sent to the media, President of the PSU, Elroy Boucher, said the decision was “spiteful, vindictive, discriminatory and is intended to victimise the worker and instill fear in the other workers”.

Boucher said that on June 28, the PSU met with both the management of the college and the chairperson of the College Board to discuss problems relating to the health and safety of the staff operating from the administrative building at the Community College.

iWitness News understands that Browne was one of the most vocal persons in the meeting and had notified the union of the health concerns at the college.

Browne received a letter two days after the meeting from Director of the SVGCC, Nigel Scott, saying that she was transferred with immediate effect to Technical Division of the college to lecture in business.

The PSU said that the June 28 meeting stemmed from complaints from some staff members that they were developing different levels of respiratory illness as a result of operating from within the administrative building and other offices at Villa, Boucher said.

He said the Environmental Health Department inspected the Villa campus of the Community College and the inspection found that there was mould growth in several offices, including the accreditation office and the sick bay.

“In concluding his inspection of the building the environmental officer stated that ‘the existence of mould growth in an indoor environment can lead to upper respiratory tract infections to those who are exposed’,” Boucher said.

He said that at the conclusion of the June 28 meeting, both parties agreed that all affected staff will be relocated to another area on the main compound of the College until it can be determined that the administrative building pose no health risk to the staff.

“In fact it must be noted that the Assistant Registrar had already been relocated from the affected area,” Boucher said.

Boucher said: “The PSU is convinced that the transfer of the Assistant Registrar was spiteful, vindictive, discriminatory and is intended to victimise the worker and instil fear in the other workers for expressing concerns regarding health risk in or from the workplace that could impair their health and well-being.”

He said the union is calling on the Board of the Community College to return Browne to her substantive post of Assistant Registrar, which she has held since 2012.

“The PSU is also calling on both the management and the board to ensure that the working environment is safe and that workers are not exposed to hazards that can adversely affect their health and well-being.

“The PSU reiterates that it will   use all means necessary to ensure that the injustice meted out to Ms. Browne is corrected and that the workers at the Community College, Villa operates out of a safe working environment,” Boucher said.

Scott told iWitness News on Tuesday that he is overseas and was not aware of the statement issued by the union.