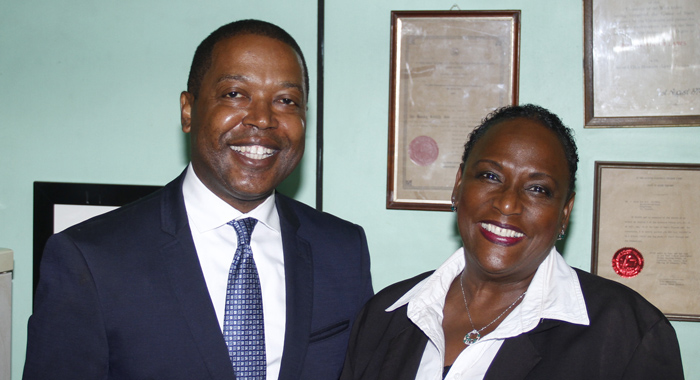 Ben Exeter, right, poses with his lawyer, Kay Bacchus-Baptiste, at her chambers in Kingstown after Monday’s court ruling. (IWN photo)

The charges brought against opposition politician Ben Exeter and Shabazaah GunMunro George, one of his party’s youth activists, last December, were thrown out of court on Monday after Magistrate Rickie Burnett upheld a defence submission to throw out the matters for want of prosecution.

Defence counsel Kay Bacchus-Baptiste made the submission at the Georgetown Magistrate’s Court, where the matters were listed for hearing, after two other magistrates recused themselves, based on submissions by the defence.

Exeter, the main opposition New Democratic Party’s (NDP) candidate for Central Leeward, was charged that on Dec. 29 at Kingstown, he did assault police corporal Cuthbert Morris, acting in the due execution of his duty, contrary to section 196 of the criminal code.

He was also charged that on Dec. 29, 2015 at Kingstown, he did resist the arrest of Morris, acting in the due execution of his duty, contrary to Section 196 of the Criminal Code.

He was further charged that on Dec. 29, at Kingstown, he did assault Granville De Freitas of Chester Cottage, causing actual bodily harm, contrary to section 193 of the Criminal Code.

Exeter and George, a student, were arrested in Kingstown on Dec. 29 on the sidelines of an opposition protest where the ceremonial opening of Parliament was taking place.

George was charged that on Dec. 29 at Kingstown, he did obstruct Cuthbert Morris, Corporal 362, acting in due execution of his duty, contrary to section 196 of Criminal Code.

He was further charged that on the said day at Kingstown, without lawful excuse in a public place, to wit the Criminal Investigations Department, had in his possession an offensive weapon, to wit a zapper, contrary to section 76(1) of the criminal code.

In June, the case went to trial before Bertie Pompey at the Kingstown Magistrate’s Court, but he agreed to recuse himself because of statements he made, resulting in an accusation from the defence that he was giving evidence from the bench.

The matters were then transferred to the Calliaqua Magistrate’s Court, where Zoila Ellis-Browne, wife of Mike Browne, a former Member of Parliament under the ruling Unity Labour Party, also agreed to recuse herself.

The matter was then transferred for hearing before Burnett at the Georgetown Magistrate’s Court.

Bacchus-Baptiste told iWitness News on Monday that when she turned up, she noticed that the Director of Public Prosecution’s representative was not present and Exeter told her that none of the virtual complainants were there.

She said that the magistrate called other matters and did what he had to do and then around 10:30, he called Exeter and George’s cases again.

Bacchus-Baptiste told iWitness News that she made a submission that since the virtual complainants were not present as well as the DPP, the matter should be thrown out for want of prosecution.

The magistrate called on the police prosecutor in court to find out what was his position.

She said that police prosecutor told the court that as far as he knew, the virtual complainants were warned to be present and he did not know why they were not there.

“So I thought that the attitude was wrong and I asked him (the magistrate) again and he eventually upheld the submission. He threw out all the cases and told them they are free to go,” Bacchus-Baptiste said.

She told iWitness News that is the prosecution tries to bring the charges again, they will be “solidly resisted”.

She said that the cases were weak, citing the evidence revealed in court during the trial that was aborted.

“The prosecution knows that they cannot succeed. The fact that the initial arrest was unlawful, once we prove that — and I was confident that I could prove that — the alleged assault would have to be thrown out. There is case law on that. It was a non-starter.

“These were always political matters… and I said that once we have a fair trial, once we had an impartial court, we were going to win. I said that from day one. I guess, for some reason, the prosecution might be saying they don’t want to come before the magistrate in Georgetown.”

“It feels like a money off my back, actually.

“I had no doubt that I would have been fully exonerated, given the circumstances in which the charges were brought against me,” he said, and thanked Bacchus-Baptiste and Israel Bruce, who represented George, “for a job well done”.

Exeter said he was always confident.

He mentioned the support from the public and “even from government officials who whispered to me, ‘Ben, you will be ok.’

“And I had always hoped that that would have been the case.”

He said he was told by a high official that it should be taken care of, but there is a process to appeal to the Minister of National Security.

“And given all the crimes in St. Vincent today and the high murder rate and a lot of senseless murders, I don’t feel very safe. I hope that the authorities will see it fit to reinstate my firearm licence,” Exeter said.

3 replies on “Charges against opposition politician Ben Exeter thrown out”