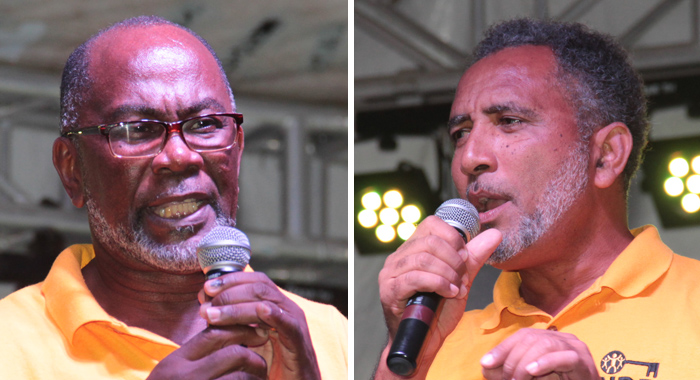 Outgoing president of the main opposition New Democratic Party (NDP), Arnhim Eustace, has told party supporters that he expects the battle to become the next leader of the party to be fierce but respectful.

NDP vice-president, Godwin Friday, who is also Member of Parliament for the Northern Grenadines, and his counterpart, St. Clair Leacock, MP for Central Kingstown, will vie to become the new NDP leader when the party holds an extraordinary convention on Sunday, Eustace said.

Eustace told party members and supporters and media audiences in a farewell address Tuesday night that since December last year, he has been thinking about a way to transition to a new parliamentary leadership, “without destabilising this ongoing march for change for St. Vincent and the Grenadines”.

Eustace led the NDP in the December 2015 general elections, which officials say the ruling Unity Labour Party won with an 8-7 margin, a repeat of the December 2010 election results.

But the NDP has refused to accept the result and has gone to court to challenge the outcomes in Central Leeward and North Windward.

Eustace said Tuesday that he has had discussions with his family, close friends, colleagues and advisors.

“In July, I summoned a retreat of the entire political leadership of the party to look at options for the way forward. It was at that retreat that I first signalled my intention to step down. Timing, I explained, was my concern,” said Eustace, who told iWitness News in September that he would have allowed the NDP’s convention to determine if he should continue as party leader.

“In recent months, I held separate one-on-one discussions with candidates, and with many other senior members of the party. At every stage, I have been open and frank about my vision for the party and country, and how best for all of us to stay true to that vision, given my desire,” Eustace said.

He told the audience that he also had to consider that the NDP was and is in the midst of “a seminal legal battle over irregularities in the last general elections.

“And, so a year after those contentious elections, I determined — after widespread consultations — that the party and the nation were properly prepared for this transition. I informed the candidates that I would be stepping down as Leader of the Opposition and President of the NDP,” Eustace said.

He reiterated that last Thursday, the NDP’s parliamentary caucus met, and by “a solid and clear majority” voted that Friday be leader of the parliamentary team going forward.

The NDP has not released the results of the vote, but iWitness News understands that Leacock, and West Kingstown MP, Daniel Cummings, who were also in that race, mustered one vote each — presumably their own — while the remaining five went to Friday.

Eustace, however, noted that the process for the election of the president of the NDP is different.

“While the elected Members of Parliament on the opposition side choose the Opposition Leader, it is all of you, the general membership of the party, who must and ought to choose the Party President,” Eustace said.

He pointed out that before he became leader of the NDP, the rank-and-file membership of the party were not allowed to choose their leader.

“It was left in the hands of a select few. I am proud to say that under my stewardship, we have succeeded in deepening democracy in our party and all the members of the party now have a genuine say in its affairs.”

Eustace said that the NDP is the most democratically-run political party in the history of St Vincent and the Grenadines – “a far cry from what happens in the other party, which is run by a certain family as if it were their personal property.

“In our democracy, our party leaders do not get to hand down leadership to family members as if it were personal property that they can bequeath. Family members, like other party members, must pay their dues. In a genuine democracy, real people get to choose their real leaders,” Eustace said.

He noted that members of the NDP will get a chance to choose a new leader on Sunday at the party’s convention and noted that at least two members, Friday and Leacock, will be vying for that post.

“My brothers St Clair “Major” Leacock and Godwin Friday must conduct this spirited contest as friends and colleagues, lest the party comes undone; and whoever emerges, I am confident, will lead a united and determined party going forward,” Eustace said.

“I expect a short, spirited, disciplined and respectful campaign in the next few days as they jostle for your vote.

“I will remain as a senior member of both the party and parliamentary caucus to give my support and my counsel, and to ensure that the transition is complete,” he said.