My questions to you, Prince Harry 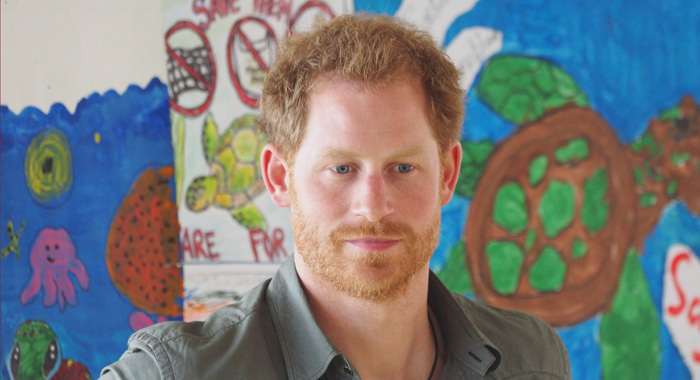 Prince Harry stands in front of pieces of art produced by student competitors in the Ministry of Fisheries essay and art competition under the theme “No Extinction In Our Generation. Save Our Sea Turtles” in Colonairie on Saturday. (Photo: Ovid Burke/IWN)

Upon first hearing of Prince Harry’s official visit to St. Vincent and the Grenadines, I was immediately intrigued as to what he felt the significance of his trip to our shores would be. Prince Harry carries with him the legacies of a monarchy whose viability and continued existence are inescapably grounded in the horrifying transatlantic triangular slave trade, which saw our African ancestors forcibly taken from their homeland and enslaved on British-owned plantations in the West Indies as “proprietary” labour in the cultivation of cotton, sugar and tobacco for consumption in Great Britain.

Despite the revulsion of this historical reality, the delightful irony of the Vincentian socio-political dynamic with England is that we still resolutely retain many of the institutions and practices that were established in these parts by the British colonists. I, having studied lived and worked in the U.K., see the allure. So my scrutiny of Prince Harry’s interactions and pronouncements are coloured by this backdrop. Attending the Governor General’s cocktail in the Prince’s honour Saturday evening and viewing the coverage on social media of his earlier island tour, he seemed to navigate the occasions with the royal diplomacy that one would expect of a young man who, from birth, has had to perform ceremonial duties on countless occasions, but in fairness to his independent spirit and character, it was nostalgically reminiscent of the gentle persona of his late mother Diana, which he appears to have inherited and made even cooler. Yet it did little to satisfy my curiosity.

Grateful as we are for the opportunities offered to Vincentian nationals who serve in the British Armed Forces and other opportunities which are not immediately obvious to the ordinary man, having toured our beautiful yet underdeveloped country, having witnessed the resilience of our people and having heard their plights, is it wrong for me to ask Harry whether he feels that there should be definitive moves for enhanced trade relations between the U.K and SVG after losing the preferential market for exported bananas? or for me to ask him whether he would support the provision of vocational and educational opportunities for the ambitious peoples of SVG in the form of scholarships or subsidized fees to U.K. schools and universities, to name a couple, especially when those opportunities are currently being offered to us by nations with whom we have no similar historical linkages?

It is true that most executive powers have now devolved to the Government and Houses of Parliament in U.K. and this may serve as a constraining factor for the Prince. However, the global social cultural and political influence of the monarchy has not waned. Prince Harry is sensitive to this as reflected in his charitable work in various parts of the world, including Africa, where assistance is offered in the fight against HIV and AIDS. We are a proud people not looking for handouts, but a fair shot at empowerment and realising our true potential. For some, the question of reparations goes too far, but, for others, the foregoing initiatives and others of a similar nature represent a meaningful affirmation of our nations’ historical ties.

As Harry departed the cruise ship terminal understandably glazy-eyed from his whirlwind tour, there was much regret that I never got the opportunity to ask him those pertinent questions. Notwithstanding, it was indeed a pleasure for the people of SVG to host you and a number of us now eagerly await your answers. In the interim, I remain intrigued.

7 replies on “My questions to you, Prince Harry”