First group of weekly winners get gifted with Digicel 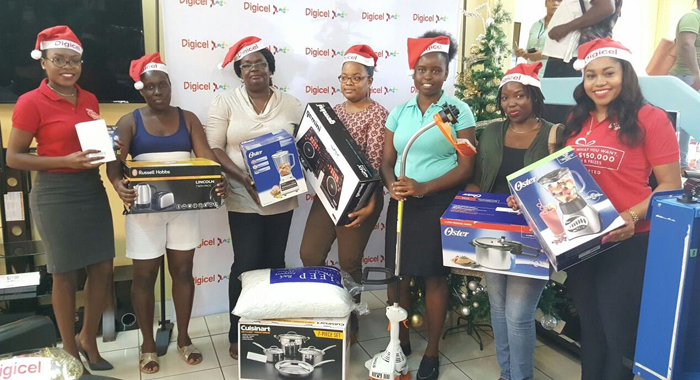 A total of $5,000 in prizes were on Friday distributed among a group of five lucky Digicel customers, as part of the telecommunication company’s “Get Gifted” Christmas promotion.

The prize giving ceremony, which was held at Courts SVG Ltd., saw all the winners being invited to pick from a glass jar a ball containing their winning amount and was then given two minutes to pick up an item or items on their wish list for Christmas 2016 amounting to the value they had picked.

Among the items the winners walked away with were weed trimmers, microwaves, washing machine, toasters, pillows and pot sets.

The winners all expressed thanks to Digicel for “gifting them”, explaining that while they knew of the Digicel Get Gifted campaign they did not expect to win or even win so soon.

The Digicel customers became winners after paying their postpaid bill in full and before the Nov. 29 due date and also topping up their phones $15 or more.

Having completed these transactions, the customers received scratched cards. Those scratch cards were activated after the customers texted the serial number found on the back of the scratch cards to the short code 1130, they were then randomly selected and named winners.

Another group of five winners will be named this Friday and every Friday until Dec. 30 when the promotion ends. Digicel is allowing Vincentians to scratch and win over $150,000 in cash and prizes in its 2016 “Get Gifted” campaign.

Digicel SVG Country Manager, John Davies congratulate all the winners and explained that the Digicel Get Gifted campaign is strategically designed to gift hundreds of Vincentians not only through significant cash offers, but with other prizes such as household appliances, free groceries among other great giveaways. Davies encourage the Digicel customers to continue participating in the campaign stating that they are not restricted and can win multiple times throughout the life of the promotion.