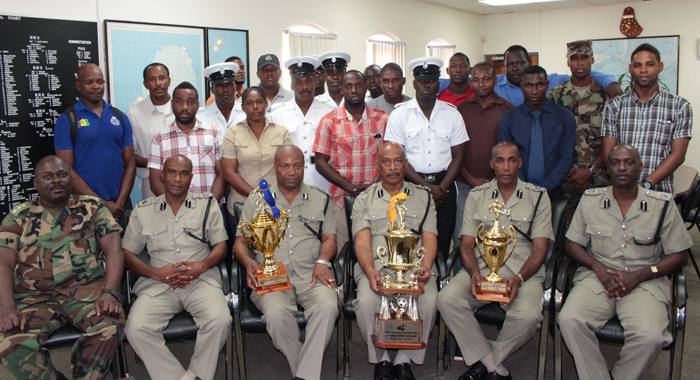 The Royal St.Vincent and the Grenadines Police Force football team has been crowned the Breakaway Masters Firms Tournament champions.

On Saturday, the police team wrapped up an almost perfect season at the Grammar School Playing Field when they defeated the Fisheries Department’s team 3-2 on penalties.

At the end of regulation time, the hotly contested game was tied 1-1, but the police team, who were determined to take home the crown, sent the crowd into frenzy when they won on penalties.

Assistant Superintendent of Police, Benzil Samuel, the team’s manager, said he is elated with the victory because the team started the tournament without having the opportunity to practice.

“This is an indication that we have guys who are capable of making the national team of St.Vincent and the Grenadines. … I am sure if we train seriously we have guys that can be selected nationally for training,” said Samuel, adding, “I am very proud of the guys.”

Samuel commended the team’s coach, Sergeant Meldon James, for his contribution towards the team’s victory.

James said the team played extremely well, noting that besides clinching this championship and knockout segment of the tournament, the police team placed second in the Barrouallie football competition after missing out on the title to Layou, who defeated them 2-nil.

Corporal Casanki Quow, who assisted in captaining the team, said there are a lot of capable footballers on the team. “From the previous games we played, we improved drastically. The guys got fitter and their skills developed as well as improved considerably.”

There was also a knockout component of the Breakaway Masters Firms tournament, which was won by the Police after drawing 1-1 with the Central Water and Sewerage Authority team before defeating them 4-3 on penalties.

The loan female police officer on the team, Police Constable Carla Burgin, was applauded by the police team’s management for her sterling contribution throughout the tournament.

Inspector Hanif Simon, Leading Seaman Gordon Charles, Cpl Quow, and captain of the team Police Constable Kemuel Miller also came in for high praises for using their knowledge and experience to keep the team together and for helping to drive them to success.

Charles used the opportunity to thank all the fans for their support. “Our performance was outstanding thanks to the fans,” he said.

Some 24 companies from across St.Vincent and the Grenadines took part in the tournament.