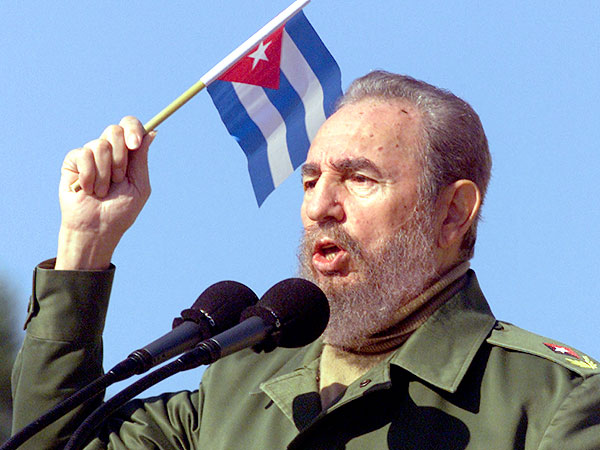 The St. Vincent and the Grenadines Parliament, on Thursday, held a special sitting to pay tribute to Cuban revolutionary, Fidel Castro, who died on Nov. 25 at age 90.

Castro ruled Cuba for almost half a century after seizing power in 1959 and relinquishing it to his younger brother, Raul Castro, in 2008, amidst failing health.

Prime Minister Ralph Gonsalves, a long-standing Castro admirer, led the tribute and said that Castro was one of four revolutionaries in the Americas whose influence had gone “way beyond the borders of their countries in most especially ways”.

Meanwhile, newly appointed Leader of the Opposition, Godwin Friday, praised Castro’s positive contribution to the world, including SVG, but also noted the curtailment of freedoms in Cuba. He, however, said only the Cuban people can adequately judge the impact of their longest-service leader on the Spanish-speaking Caribbean nation.

He said the Caribbean is historically blessed with impeccable leaders, including Vincentian national hero, Joseph Chatoyer.

But Gonsalves said that it is compellingly arguable that the two larger-than-life Caribbean revolutionaries with global impact beyond the relatively small size of their nation states have been L’Ouverture and Castro.

He said Castro was able to survive personally and ensure the consolidation and development of revolutionary Cuba despite over 600 reported assassination attempts against him by “the agents of imperialists” and a hugely damaging illegal economic blockade against Cuba for over 50 years, notwithstanding the recent thaw in ties between Havana and Washington.

“In the process, Fidel and revolutionary Cuba outlasted the unremitting and focused hostility of 10 American presidents,” Gonsalves said.

He said Castro’s construct of socialism in Cuba was unjustly subjected throughout to external pressure from “agencies and institutions in the service of imperialism and monopoly capitalism centred in the USA — a mere 90 miles away”.

In the midst of a “parallelogram of hostile forces and constraints and a host of political accidents and opportunity occurrences”, revolutionary Cuba, under the Castros, has built a country of an upper middle level status in the ranking in accordance with the Human Development Index of the United Nations Development Programme, Gonsalves said.

“Revolutionary Cuba’s phenomenal advances in the areas of education, health, social protection, poverty reduction, cultural and sporting upliftment and social inclusiveness, including standing firmly against discrimination on the basis of race and sex have been recognised by objective observers the world over,” Gonsalves said.

He said that under Castro, revolutionary Cuba has defended the nation’s independence, sovereignty, territorial integrity and the sensibility of the Cuban components of the Latin American and Caribbean civilisations.

At the same time, Cuba has extended solidarity with nations globally, especially developing countries, he said, adding that this is most obvious in Africa, Asia, the Caribbean and Latin America in a wide range of areas, including education and health, airport construction, agriculture, culture and sports, and on political questions regarding the defence of sovereignty, independence and majority rule, particularly in southern Africa, Gonsalves said.

The prime minister said that Cuba’s solidarity and selfless internationalism toward SVG have unfolded particularly since the development of the very close ties between Havana and Kingstown after his Unity Labour Party came to office in March 2001, the Sir James Mitchell New Democratic Party (NDP) administration having established formal ties with Cuba several years earlier.

He said Cuban universities have trained, free of cost, hundreds of young Vincentian professionals, in a wide range of areas, including medicine, engineering, nursing, dentistry, and the natural sciences.

“Cuba has provided to St. Vincent and the Grenadines their own doctors, nurses, engineer, agronomist and other skilled personnel. Cuba, in conjunction with Hugo Chavez’s Venezuela, delivered to us Vision Now under which programme over 3,000 Vincentians received eye surgery, most of them in Cuba itself, free of charge to us.”

Gonsalves said that Cuba initiated the light bulb programme under which over 250,000 light bulbs were provided free to Vincentian homes “in an amazing energy-saving exercise”.

He spoke of Cuba’s assistance in building the modern medical complex at Georgetown — which is still incomplete after almost a decade — and “the dazzling Argyle International airport” — which has missed multiple completion dates annually since 2011.

“These are but some of the practical expressions of solidarity which Fidel’s Cuba has selflessly provided for our country. We say thanks to him and the Cuban people.  We are most grateful; part of us is, therefore, Fidel.”

In the hemisphere, Gonsalves said Castro was at the forefront of the formation of Bolivarian Alliance for the Peoples of Our America (ALBA), PetroCaribe, the Community of Latin American and Caribbean States, of which SVG is a member and [which] play an active role in the interest of the country.

Gonsalves said Castro was his comrade and friend and was fond of his wife, Eloise Gonsalves, and children and enjoyed Mrs. Gonsalves’ company very much.

The prime minister said he was one of the region’s leaders with whom Castro had a close political and personal relationship.

“One day soon, I shall write in detail of my personal encounters with and reminiscences of Fidel.

“I recall his honesty, his generosity of spirit, his sharp intelligence and wit, his encyclopaedic knowledge and voracious reading on a wide range of subjects. His curious and inquiring mind, his capacity for working long hours at the highest level, his commitment to justice, equality and genuine freedom. And, above all, his elemental love for people, especially the oppressed and marginalised.”

Gonsalves, however, said that his government’s defence of Cuba’s right to pursue its own path does not mean that it has a preference for a one-party socialist model of the Cuban type.

“That model has grown out of the Cuban condition, its historical circumstances and imperialism’s relentless quest for hegemony in that country.

“Our political experiences in St. Vincent and the Grenadines are different, so, too, our competitive political system, which we treasure. Still Cuba and St. Vincent and the Grenadines face many similar contemporary challenges demanding cooperative action. Above all, we are both Caribbean countries, part of a noble Caribbean civilisation. We are, thus, bonded together always,” Gonsalves said.

Meanwhile, Friday, in his first address to parliament since becoming Leader of the Opposition late last month, said he was shocked by Castro’s death, but added that he should not have been given his age and health.

“But the fact that his demise was no longer just hypothetical but real still took some getting used to,” said Friday, who is also MP for the Northern Grenadines and has been a parliamentarian since 2001.

Friday noted the varying strong reactions that Castro spurred in his supporters and detractors.

“To some, he was the devil incarnate whose demise should be celebrated with festival vigour,” Friday said, adding that some of this was seen in the United States immediately after Castro’s death.

“To many others, inside and outside of Cuba, he was a great revolutionary who brought hope of a better and more just world,” Friday further said, adding, “To everyone, however, he undoubtedly was a larger than life figure. That is why it took some getting used to when I heard he had died.”

The opposition leader said he never met Castro but had heard that he was “warm and engaging, that his presence filled any room that he entered; that he loved the people of St. Vincent and the Grenadines and showed this by the enthusiastic manner by which he greeted our leaders, past and present.

“These stories have led me to think that if I had met him, I, too, would have been impressed and affected by his warm and ebullient personality. Now, that is all gone,” Friday said.

He said that although the former Cuban leader has died, the political and public Castro will continue for a long time to come.

“In that regard, it must be noted that our two countries, Cuba and St. Vincent and the Grenadines established diplomatic relations when Castro was the leader in his prime in Cuba and Sir James Mitchell likewise the Prime Minister of St. Vincent and the Grenadines,” said Friday, who was recently elected president of the main opposition New Democratic party, which Sir James founded.

Friday noted that SVG and Havana established relations at a time when the Cold War was still raging and the dominant powers saw state-to-state relations through the lens of that overarching contest.

“From our perspective, the concerns of the United States could not be ignored or underestimated but Sir James wisely took the step of establishing closer ties with Cuba.”

He said SVG benefitted greatly from its decision to establish formal ties with Cuba, adding that Kingstown received a number of scholarships from Havana over the years.

“Many doctors, dentists and other professionals were trained in Cuba. Many people who may have never had the opportunity to attend university, got free university training in Cuba and returned home to make their own contribution to nation building in St. Vincent and Grenadines,” Friday said.

He told parliament that at a time when many professionals from other Caribbean countries were finding difficulties securing work in their home countries, the NDP government allowed Cuban-trained Vincentian doctors to work in SVG.

He said the NDP administration was the first in the English-speaking Caribbean to hire Cuban-trained doctors.

“We cannot forget that the numerous scholarships and training that our students enjoyed in Cuba were made possible by the generosity of the Cuban government and people led by Fidel Castro,” Friday said adding that other countries, some as far away as in Africa, benefited from this also.

“And for Cuba, our extension of a hand of real friendship helped further to bring that country back into the family of Caribbean nations — countries which hitherto to many Caribbean people would have seemed much further away from them than the mere span of the Caribbean Sea that physically separated us.”

Friday said Cuba’s remarkable accomplishments in public health and health generally have been cited by respectable organisations as a model to be followed by developing countries.

He mentioned the halt of the spread of HIV/AIDS in Cuba and said that in times of hurricane and natural disasters, no government in the Caribbean responds as swiftly as the Cuban government and people.

“This speaks of a desire to put people’s safety and development in the forefront of public policy and planning. We could all learn from that,” Friday said.

He, however, told Parliaments that there have also been “caveats”.

“We know what these are. The mere fact that Castro was the leader of Cuba for 50 years was an indication that, as to politics and political power in Cuba, things were not what we were used to in the Caribbean. There were not the usual transitions that we would expect from competitive politics.  In the same way that the world heard about the accomplishments in the social sphere, and lauded the Castro regime and his government for them, the world also heard about the lack of political freedoms, the lack of press freedoms and the certain restrictions in the ordinary lives and the business of the people of Cuba.”
The opposition leader said while Prime Minister Gonsalves has offered his explanation about the reasons for this, “It hasn’t stopped us from hoping and questioning and criticising as friends where it is justified.”

Friday, however, said that the Cuban people are best positioned to have the final say on the impact of Castro’s rule on their country.

“Where the country goes in the direction of greater political freedom, where it is demanded, and, I dare say, where it is eventually conceded, now that his commanding presence is no longer there to guide the process will be a true test of what he achieved over the last 50 years as the leader of Cuba. And, therefore, it would also be the test of his lasting legacy to the Cuban people and to the world.

“As a friend, I extend my heartfelt sympathy to the Cuban people for their loss and share with them the hope for the better future in Cuba and for the broader Caribbean,” Friday told Parliament.