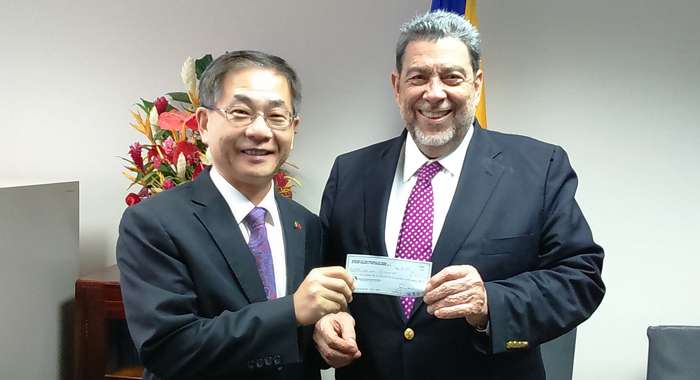 Taiwan has contributed US$150,000 to the disaster relief efforts in the aftermath of the damage and loss resulting from severe weather over the last few months.

On behalf of the Government of the Republic of China (Taiwan), Ambassador Baushuan Ger handed over to Prime Minister Ralph Gonsalves a cheque of US$150,000 (EC$403,230) as a contribution to disaster relief for the severe impacts caused by recent trough systems in St. Vincent and the Grenadines (SVG).

In addition, to the grant provided by the Taiwan government, the SimplyHelp Foundation, a non-profit humanitarian organisation founded by Taiwanese diaspora in Los Angeles, has decided to donate a 20-foot container of disaster-relief goods to SVG upon the request of the embassy.

The contents of the container will include clothes, shoes and household items with a value of about US$100,000,  The container is scheduled to arrive in January 2017.

Ger, on behalf of the government and people of the Taiwan, expressed the country’s solidarity with SVG at this challenging time, the embassy said in a press release.

He conveyed heartfelt sympathies of President Tsai Ing-wen to those who suffered in the floods and prayed for swift rehabilitation and recovery in SVG.

Gonsalves acknowledged the goodwill of the government and people of Taiwan and expressed his appreciation for the assistance provided both in kind and cash.

The grant will be used on immediate humanitarian efforts while the relief goods being shipped to SVG will be distributed through coordinated social network.

SVG and Taiwan celebrated this year the 35th anniversary of the establishment of diplomatic relations.

One reply on “Taiwan donate$ to SVG disaster relief”