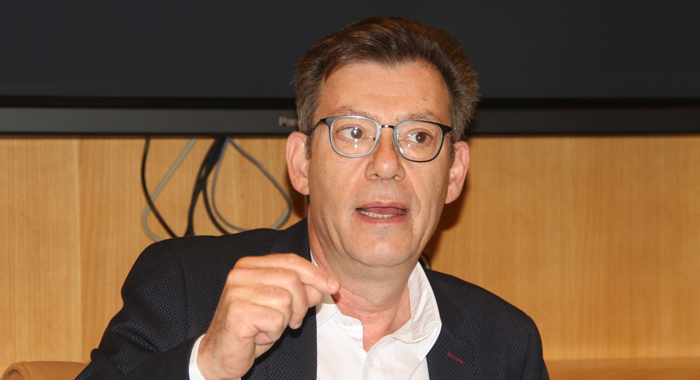 Emmanuel Nahshon, a spokesperson at the Israeli Ministry of Foreign Affairs. (Photo: CMC/IWN)

JERUSALEM, Dec. 20, CMC — Israel says it will no longer accept a situation in which some countries quietly enjoy the benefits of relations with Jerusalem while speaking out against the Jewish nation in public.

Emmanuel Nahshon, a spokesperson at the Israeli Ministry of Foreign Affairs, made the position of the Benjamin Netanyahu government clear during an exchange with journalists from the Caribbean Community (CARICOM) here last week.

The media professionals were on a one-week visit to the Holy Land, sponsored by Fuente Latina, a registered U.S. non-governmental organisation focused on educating Latin American audiences about Israel and the Middle East by “providing factual information and analysis”.

Nahshon told the group that Israel innovations make it an attractive partner to countries.

“…Israel has well-known expertise and know-how in certain areas and some years ago, we would be willing to accept a situation in which, under the table the relations would be excellent, with any given country, but above the table, these countries will vote against us and express in a very harsh way against us,” Nahshon told reporters but did not identify any country in particular.

Nahshon said that Jerusalem is looking to improve relations with the 15-member CARICOM grouping and has annually extended invitations to leaders from the 15-member bloc to visit, but none have so far accepted.

CARICOM often votes against Israel at the United Nations because of the action of Middle East’s sole democracy on it neighbour, Palestine, with which it has land a decades-old conflict, mainly over land.

Speaking at the ceremony in which the envoy presented his credentials, CARICOM Secretary General, Irwin LaRocque said that he looked forward to the development of a more structured and formal mechanism for cooperation between Israel and CARICOM.

“CARICOM has much to gain and learn from Israel and, as in any meaningful partnership, I am sure that Israel has much to learn from the Caribbean Community” he said, adding that there were two important areas in which CARICOM could benefit from a strengthened relationship at the regional level: protected agriculture and water management.

And, in February, as CARICOM accredited a new Israeli envoy, the Middle-Eastern state reaffirmed its commitment to assist CARICOM to achieve its ideals.

Mordehai Amihai-Bivas, plenipotentiary representative of Israel to CARICOM, describing relations between Jerusalem and CARICOM as “natural”, adding that through the Israeli Agency for International Development Cooperation, dozens of professionals from the region have advanced their training in agriculture, healthcare, education, alternative energy and sustainable development, over the past year.

He said Israeli will expand that cooperation with entrepreneurial training for young people in four CARICOM member states.

This reality, however, he said, presented a unique opportunity for CCARICOMnations to become leaders in sustainable development.

3 replies on “Israel rejects ‘double standards’ in relations with countries”