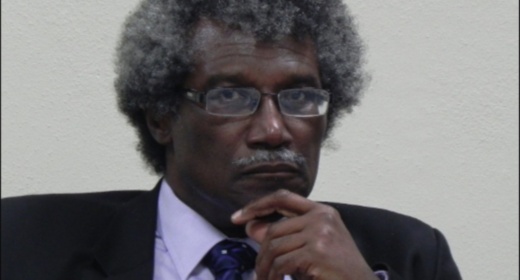 Sir Dwight died just over a year after announcing his retirement in late November 2015 after 26 years of service in his position as governor.

He is the longest-serving governor of any central bank, monetary authority, or federal reserve, having served since 1989

“I was informed very late last night by the Prime Minister of St. Lucia of the death of Sir Dwight Venner, who served us at the Eastern Caribbean Central Bank for a very long time,” Skerrit said but gave no details about how Sir Dwight died.

“This is a great OCES (Organisation of Eastern Caribbean States) man, somebody who believed in the integration of the OECS, paid a tremendous role in getting us to the economic union.,” Skerrit said.

He said Sir Dwight was “a very, very diligent person, very intelligent, very focused on the issues and solution to the challenges which we have bee confronting over the years”.

He will be remembered for his strong contribution to the monetary union, Skeritt said.

“I think that in the last measure, the stability of the Monetary Union, the currency, we owe it, in great measure, to the guidance and the advice which we received over the years from Sir Dwight Venner.”

The Eastern Caribbean dollar has been pegged to the United States dollar since July 7, 1976, and the exchange rate is US$1 = EC$2.70.

Skeritt said he could have called on Sir Dwight for advice on local and regional financial matters.

“He was an encyclopaedia of ideas and knowledge. So, we have lost in the OECS, in the Caribbean, a great regionalist, somebody who believed and lived and who breathed integration and hoping and praying for the closer unity and integration of the OECS and particularly was very strong on the OCES coming together.”

Skerrit also said that Venner was someone who caused the international community to have great respect for OECS.

“I’ve seen times when he’s been to Washington speaking to the World Bank, speaking to the IMF and he was very strong on these institutions and other showing and demonstrating great respect for our region.”

He recalled that when the Schengen area wanted to create the euro, they had discussions with Sir Dwight, seeking his advice on how OECS had been able to create a single currency and maintain its stability over an extended period of time.

“So we have lost a great person who, even though he retired from the Central Bank, he continued to be available to all those would seek his counsel on a wide range of matters,” Skeritt said and condolences to Sir Dwight’s family and friends.

Sir Dwight was an economist by training and was educated at the University of the West Indies, Mona, Jamaica where he obtained both Bachelor and Master of Science degrees in economics.

He served as a junior research fellow at the Institute of Social and Economic Research at the University of the West Indies and then as a lecturer in economics from 1974 to 1981.

Prior to becoming governor of the Central Bank, he served in the position of Director of Finance and Planning in the St. Lucian Government between November 1981 and November 1989.

Sir Dwight received the award of Commander of the British Empire (CBE) in 1996 in St Lucia and was recognised as a Distinguished Graduate of the University of the West Indies on its 50th Anniversary in July 1998.

In June 2001, he was awarded Knight Commander of the Most Excellent Order of the British Empire (KBE) in St. Vincent and the Grenadines for services to the financial sector.

In October 2003, the Sir Dwight received an honorary degree, the Doctor of Laws from the University of the West Indies.

In December 2011, he was awarded the St. Lucia Cross for distinguished and outstanding service of national importance to St. Lucia.