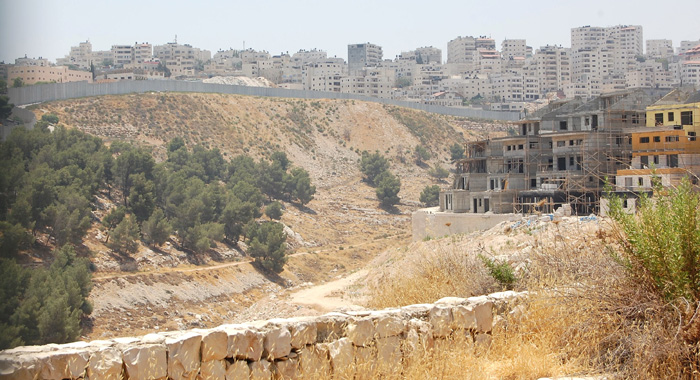 Many Palestinian labourers from the Shuafat refugee camp across the barrier work on construction in the Israeli settlement Pisgat Zeev in East Jerusalem to the right. Credit: Jillian Kestler-DAmours/IPS.

UNITED NATIONS, Dec 22 (IPS) – The UN Security Council has indefinitely postponed a vote on a draft resolution demanding an end to Israeli settlements.

Hours before the Security Council was scheduled to vote, Egypt pulled the Arab-backed resolution from the table, making no indications of when or if it will be brought back up.

The resolution condemned the “construction and expansion” of Israeli settlements in the West Bank and East Jerusalem, calling them a “flagrant violation” of international law and a “major obstacle to the achievement of the two-State solution.”

In fear that the United States might shift from its long-standing protection for Israel at the UN, Israeli Prime Minister Benjamin Netanyahu urged President Obama to veto the “anti-Israel” resolution.

President-elect Donald J. Trump echoed similar calls soon after, stating: “As the United States has long maintained, peace between Israelis and the Palestinians will only come through direct negotiations between the parties, and not through the imposition of terms by the United Nations.”

He added that the move puts Israel in a “poor negotiation position” and is “extremely unfair to all Israelis.”

The President-elect’s remarks reflect the stark contrast on Middle East policy between the incoming and departing administrations.

Trump recently nominated as the next ambassador to Israel David Friedman, a bankruptcy lawyer who supports and raises funds for prominent West Bank settlement Beit El. Friedman has previously dismissed the idea of a two-State solution.

Most recently, the Obama administration vetoed a 2011 resolution that similarly criticised settlements, while another 2013 resolution failed to garner enough votes.

In order for a resolution to be adopted, nine votes are needed and no vetoes by the Council’s five permanent members which include China, France, Russia, the United Kingdom and the United States.

Though it is uncertain how the United States would have voted, the Obama administration has been critical of settlement construction in the West Bank and East Jerusalem. In October, the State Department “strongly condemned” the Israeli government’s decision to create a new Jewish settlement in the West Bank.

The new housing complex, which could include up to 300 units, aims to relocate residents from nearby Amona settlement which Israeli courts declared illegal and ordered its evacuation and demolition.

The State Department noted that the move contradicts Israel’s previous pledge to stop constructing new settlements and that it would damage the prospects for a two-State solution.

“It is deeply troubling … that Israel would take a decision so contrary to its long term security interest in a peace resolution of its conflict with the Palestinians,” the agency said.

Prior to the settlement approval, the U.S. agreed to provide $38 billion in military assistance over the next decade to help strengthen Israel’s long term security.

“Israelis must ultimately decide between expanding settlements and preserving the possibility of a peaceful two-State solution,” they concluded.

Almost 600,000 Israelis live in the West Bank and East Jerusalem, areas that Palestinians want as part of their future state along with the Gaza Strip. Israel captured those territories in the 1967 war and considers Jerusalem as its capital.