Purchasers to begin paying per pound for agricultural produce 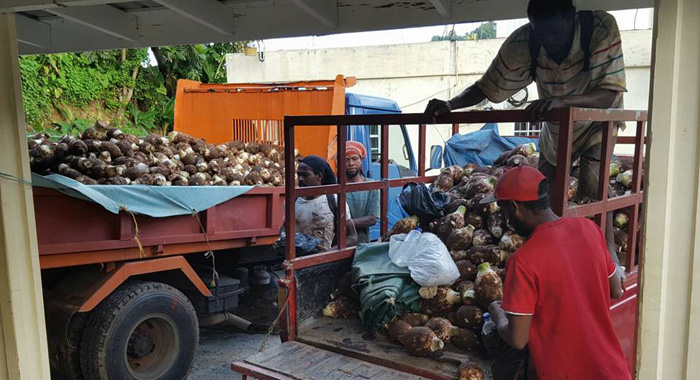 Farmers will soon start to be paid per pound — and not per sack — for their agricultural produce, Minister of Agriculture Saboto Caesar said on Wednesday.

He said that is one of several issues that farmers and other traders in agricultural goods from St. Vincent and the Grenadines have waited a long time to have addressed.

“So that you get your exact weight. And we know that it (paying per sack) has been a tradition, but I am working toward embracing the new dispensation of purchasing,” he told an event on Wednesday regarding a regional shipping initiative for agricultural produce.

“Trust and honesty is important — not only the side of the purchasers to pay on time and to ensure that the pricing is coated and covered in equity, but the farmers, also, must ensure that you don’t harvest before your produce is ready for the marketplace just because you’re hearing that a good price is available now because the spoilage on the supermarket shelf, it is going to create a backlash for the purchasers, and it is going to pass all the way down the way,” Caesar said.

“I have great confidence in the farmers of St. Vincent and the Grenadines and the farmers in the OECS (Organisation of Eastern Caribbean States), the other OECS islands, who will be joining this platform very soon,” he said of the shipping initiative, which has support of the OECS Commission.

Caesar said farmers are living in the age of diversification. There is a market in the region for bananas and plantains, he said, but added, “… the vagaries of climate change, which is upon us, is forcing us to create certain strategies of adaptation and mitigation and it would lead us down a particular path where we have to embrace other commodities as important means of production.”

He said the discussion has already started for the production of coffee, adding that chocolate production is expanding and that this year, the St. Vincent Chocolate Company will begin producing milk chocolate to join the dark chocolate it began producing last year.

In 2017, the minister of agriculture from Prince Edward Island will visit St. Vincent and the Grenadines to continue discussion about embryo transfer in cattle, said Caesar, who recently visited the island, one of eastern Canada’s maritime provinces

He said his ministry is also holding discussions with the government of Cuba specifically regarding artificial insemination.