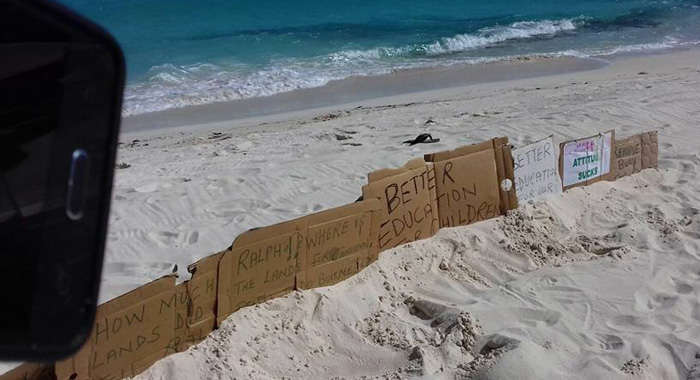 Residents of Canouan continue to demand access to all of the island’s beaches. (Photo: Terannce Bynoe/Facebook)

Leader of the Opposition, Godwin Friday, is calling for a “lasting and just resolution” to the beach access impasse in Canouan, where two activists were arrested on a beach near a resort on Jan. 5.

The arrest came in the wake of a town hall meeting between Friday and residents of the island.

Member of Parliament for the Southern Grenadines, where Canouan is located, Terrance Ollivierre, himself an opposition lawmaker, also attended the meeting.

Friday said on his weekly radio programme on Nice Radio on Friday that he and Ollivierre also met with developers on the island, where residents have been advocating for almost two decades for access to beaches in the “developed” north of the island.

“The charging of people and the slapping them with restrictions and so on, that is not going to be a solution. That is something that we will continue to urge that the parties come together and those who have the means to do it, that is, the government, find a resolution,” Friday said.

Terrance Bynoe, 49, who has been advocating for access to beaches on the island since 2000, and Andrew Foyle, 76, pleaded not guilty to a charge that they “did enter upon the property of Canouan Resort Development Limited as a trespasser with intent to annoy”.

They were each granted EC$2,000 bail and are scheduled to appear in court in Union Island on Jan. 20.

Friday said that the government “created the problem, essentially, by whatever agreement they made with the resort and it’s for them to explain it to the people and to try to persuade them that this is in their interest, which I find that very difficult to do.

“But access to the beach is something of a continuing issue in St. Vincent and the Grenadines and we have to find, accept as a principle, that these are all public beaches and we cannot willy-nilly inhibit public access to it, and, in that regard, I expect that the Coast Guard will take a more active role in enforcing any restrictions that they put with respect to any of our beaches or the use of our waterways, our marine life and all these sorts of things.”

Residents of the island have complained about the actions of the resort owners in a no-anchoring and no-fishing zone declared in the sea in front of the resort.

Earlier this year, the resort again placed buoys in the sea to mark the restricted area, although the government had ordered them to remove the floating devices last year.

“These are things for the government to enforce, not for private entity to enforce…” Friday said, adding that the private entity “may enforce them in ways that serve their best interest and not just necessarily the public interest”.

Prime Minister, Ralph Gonsalves, speaking on local radio recently said “persons have a right of access to beaches from land and from sea”.

He, however, said that right has never been “unfettered or unregulated”.

“And it depends on all the practical circumstances, how is that right being exercised,” said Gonsalves, who is also Minister of Grenadine and Legal Affairs,

He said his understanding is that the resort owners have said that given that they have, in the northern part of the island, “essentially a gated-community with resorts and private villas which are also rented”, persons wishing to go to the beach should come to gate and be transported by a golf cart to the beach.

“Now, the question is this: is that an unreasonable form of entry, of exercising your right? And I don’t think that most people would say that that is unreasonable.”

Activists on the island have suggested that the resort will not make transportation available based on the fancies of islanders.

Gonsalves said that every country that has a seascape regulates it.

But Friday said that based on his meeting with residents of Canouan, the issue isn’t so much the regulation.

He said that residents say the arrangements on the islands were agreed without consulting or involving them.

“It is simply a fait accompli and without any proper enforcement from public authorities that it seems to be coming from the private entity and I think that puts them, the private entity, the resort, the developers, in a very awkward position as well, because they have to defend what they have negotiated with the prime minister as their access rights or control rights or whatever it is they agreed to without the government saying, ‘Well listen to me people, this is what we are saying, this is how we will exercise the access, this is why are putting these markers out here to protect swimmers or whatever and then this is how we are going to enforce it.

“… if they are so reasonable, then go to the community and explain them. Go in a town hall…”

Activists on Canouan have noted that Gonsalves has not travelled there to meet with them as he did in the lead-up to the March 2001 election, when he was opposition leader.

As opposition leader, Gonsalves brought Barbadian calypsonians Gabby to perform his hit song, “Jack” (The Beach is Mine), when islanders were agitating, under the New Democratic Party administration, to ensure that they retain access to the beaches even as the lands were being leased to foreign investors.

But Gonsalves said that if anybody says they want him to solve the problem, “meaning that have one person defeated and another one victorious, I am not Solomon you know.

“There is a set of laws in the country and there are agencies which deal with the laws. I state what I understand the law to be and I ask everybody to reasonable,” Gonsalves said.

After Bynoe and Foyle appeared in court, lawyer Kay Bacchus-Baptiste called on Gonsalves to solve the beach access impasse.

(In the video below, Bynoe documents what he says is the resort enforcing the law, a situation that Friday has objected to.)