High security as Trinidadians appear in court in St. Vincent 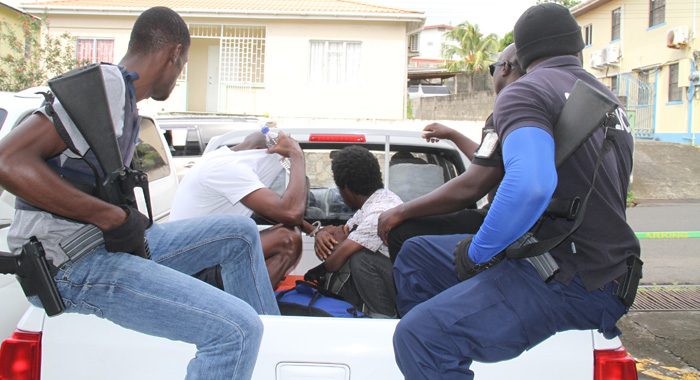 The men attempt to hide their faces as they leave the Kingstown Magistrate’s Court Tuesday under heavy police escort. (iWN photo)

There was increased security at the Kingstown Magistrate’s Court on Tuesday where two Trinidadians appeared to answer to two immigration charges.

Officers from tactical units of the Police Force were outside and inside the court with high-powered rifles and side arms as Ishmael Mohammed and Keno McPhee appeared before Magistrate Bertie Pompey.

The men were charged that between Dec. 14, 2016 and Jan. 14, 2017 at Kingstown, they, being prohibited immigrants, did enter the state by boat without a passport, contrary to Section 5(1) of the Immigration (Restriction) Act.

They were also charged that between Dec. 14, 2016 and Jan. 14, 2017 at Kingstown, they did enter the state by boat and disembarked without the consent of an immigration officer, contrary to Section 10(2) of the Immigration (Restriction) Act.

They pleaded guilty to both charges.

Prosecutor Station Sergeant Elgin Richards told the court that on Jan. 14, 2017, officers from the Rapid Response Unit were on duty at the Grenadines Wharf in Kingstown.

The officers noticed that the men spoke with a non-Vincentian accent and questioned them about their status in St. Vincent and the Grenadines.

The accused men told the police officers that they are from Trinidad and Tobago and had entered the stated on a boat without checking with authorities.

The men were detained and handed over to immigration authorities, who brought the charges against them.

The prosecution made an application that in addition to any penalties that the magistrate would impose on the men that he also orders that they be deported.

Both men apologised to the magistrate for their actions and said that it would not happen again. They further asked for leniency.

Asked why they came to SVG, Mohammed said he was “joyriding”, while McPhee said he was “having innocent fun”.

Before handing down his sentence, Pompey said that he recognised that Trinidad and Tobago is a part of the Caribbean Community – of which St. Vincent and the Grenadines is also a member.

“You can’t just walk in and walk out,” Pompey said, adding, “It’s not Tobago.”

Pompey added that SVG is a different country from Trinidad and Tobago, adding that entering the country illegally is a crime against its national security.

“You can’t just walk in and out as you please. As I told somebody yesterday, we don’t have the wet foot – dry foot policy here as the Americans did. I think it was recently abolished.”

Pompey fined each defendant EC$800 to be paid forthwith or, in default, six months in prison and issued a deportation order for them.

2 replies on “High security as Trinidadians appear in court in St. Vincent”