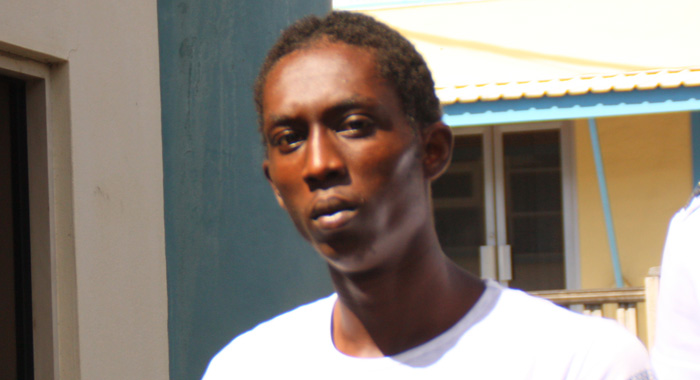 Kemron Spencer will spend the next five years in jail for possession of a homemade firearm.

A 23-year-old Campden Park man who told the Serious Offences Court on Tuesday that he had found a homemade firearm, a mask, and a pair of gloves that police recovered at his home, will spend the next five years in prison.

But it was Senior Prosecutor Adolphus Delplesche’s own testimony about his fellow villager, Kemron Spencer, that might have cemented in the magistrate’s mind the stiff penalty that she might have already been considering for him — as has been the case with all firearm offenders appearing before her recently.

Spencer’s early guilty plea only earned him a two-year discount on the maximum sentence that the law allows for firearm offences. In addition to five years in jail for possession of an unlicensed firearm, he was jailed for three months for possession of 61 grammes of marijuana.

Before handing down sentence, Chief Magistrate, Rechanne Browne-Matthias noted Spencer’s behaviour in court on Monday — when he pleaded guilty to the possession of the firearm, as well as 61 grammes of cannabis.

Spencer’s sentencing was postponed to Tuesday to allow prosecutors to decide how to proceed against his co-accused, Nadalia Gordon, 30, who had pleaded not guilty to both charges.

But Spencer protested the adjournment after he had left the dock and continued to mutter rudely in court, even after a court orderly spoke to him.

The charges against Gordon were withdrawn on Tuesday after Spencer accepted the facts as presented by the prosecution.

During the sentencing segment of Tuesday’s court hearing, the chief magistrate asked Spencer what he had to say for himself and he asked for leniency.

The magistrate asked him if he was a top student and if he was good at science in school. Spencer said no to both questions.

She further noted his behaviour in court on Monday and Spencer apologised, saying he was frustrated.

“You need to know time and place,” the magistrate told the defendant.

“I apologise. My wrong, your honour,” Spencer said.

The chief magistrate said that possession of an unlicensed firearm is a serious offence.

The defendant told the court that he didn’t make the homemade firearm.

“He finds everything and he takes them to his house,” Delplesche told the court, sarcastically.

“Your honour, I know the defendant and it is not for want of being spoken to by his parents,” the prosecutor said, adding that he also knows the defendant’s parents and grandparents.

“But he feels he is a bad man,” Delplesche said of the defendant, who reached Form 3 before leaving school.

“Nobody can talk to he,” Delplesche further said, adding, colloquially, “He who thinks he is a bad man can dead.

“Your honour, he cannot escape a prison sentence of the highest order,” Delplesche told the court, adding, “I’m only sorry for his mother.”

The magistrate noted that Spencer had recently appeared before her.

Spencer was among five Campden Park men who were in May 2014 charged with the March 22, 2014 murder of fellow villager 48-year-old fisherman, Nolly Jack.

Jack was found shot to death along the road to Lowmans Bay early March 22, sometime after he left home during the pre-dawn hours to go fishing.

“The boy just pompous,” Delplesche commented, adding that even before the magistrate had finished reading the charges against him on Monday, Spencer said he was guilty.

The court heard that detective Constable Chambers lead a party of police personnel in the execution of a search warrant at Spencer’s home and premises last Friday, Jan. 13, around 8:30 a.m.

Spencer was met at home and the warrant was shown and read to him and police asked if he had anything illegal to declare, and he told them yes and handed over some plant-like material resembling cannabis.

He told the police, “Officer, is my weed.”

The police pointed out to him the offence of possession of a controlled substance and continued to search.

In Spencer’s bedroom, they found a black and red mask and a pair of gloves.

The police questioned Spencer about these items and he told them he found the mask outside.

Detective Chambers took Spencer outside of the house and continued the search and found in the presence of the defendant a firearm near the fence.

A police ballistics expert found the firearm to be in good working order.

Spencer was taken into custody and charged with possession of a firearm and a controlled substance.

The chief magistrate told the defendant that the charges against him “fit beautifully with your modus operandi”.

She told him that she detests firearm offences, “with a passion”, adding that innocent people can get killed.

She further said that lawmakers have signalled the seriousness with which firearm offences should be by setting the highest prison term at seven years and judicial officers can also impose a fine in addition to a prison term.

Browne-Matthias noted that Spencer is young and has had opportunities to turn his life around. She, however, noted that every time he appears before her, it is for a more serious charge.

“You are not hearing, you are not taking anything. The message I would want to send is one of deterrence. You need time to reflect,” she told Spencer, adding that there are many programmes at Her Majesty’s Prison that can help to rehabilitate him.

Before the magistrate handed down the fine, the prosecutor told the court that Spencer’s grandfather was responsible for moulding a lot of young people in Campden Park and had cricket and football teams.

“I used to play in his grandfather’s yard,” Delplesche said.

“But he think he bad,” the prosecutor said of Spencer.