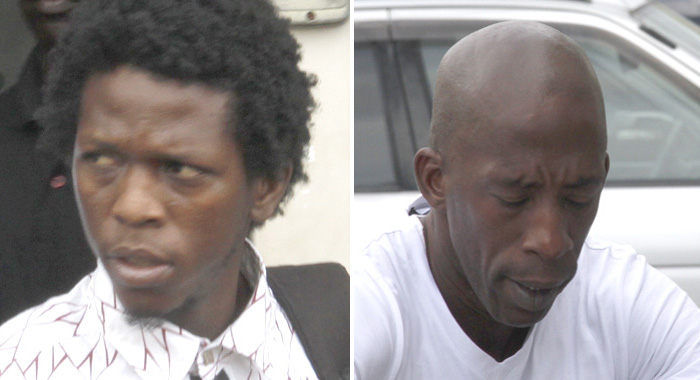 The two Trinidadians who were this week fined for entering St. Vincent and the Grenadines illegally came to the country to partner with local criminals,

“Because of the upsurge in criminal activities leading into 2016, we … received intelligence that foreign nationals, our neighbour, [from] Trinidad in particular, came to these shores with intentions to work with criminals here. And we are happy to report that we have since apprehended two of those persons who are in custody at the moment,” the police chief told the media briefing at which police announced the seizure of a number of illegal guns and ammunition.

There was increased security at the Kingstown Magistrate’s Court on Tuesday where Trinidadians Ishmael Mohammed and Keno McPhee pleaded to two immigration charges and were each fined EC$800 forthwith or six months in prison.

The men were charged that between Dec. 14, 2016 and Jan. 14, 2017 at Kingstown, they, being prohibited immigrants, did enter the state by boat without a passport, contrary to Section 5(1) of the Immigration (Restriction) Act.

They were also charged that between Dec. 14, 2016 and Jan. 14, 2017 at Kingstown, they did enter the state by boat and disembarked without the consent of an immigration officer, contrary to Section 10(2) of the Immigration (Restriction) Act.

Mohammed told the court that he was “joyriding” when he came to St Vincent and the Grenadines while McPhee said he was “having innocent fun”.

Officers from tactical units of the Police Force were outside and inside the court with high-powered rifles and side arms.

Hadaway told the media that the police have no further interest in the men “at this moment”.

He said his last update was that they had not paid the fine imposed by the court and would, therefore, be imprisoned until the fine is paid or until they have served the sentence, after which they will be deported.

The police chief also spoke about the link between the drug trade and the 40 homicides last year, a new record in SVG.

“Information came to the police that drugs arrived in St. Vincent. And no sooner than we go that information, we … have seen an upsurge in criminal activities and we believe it is all related,” he said, adding that the drug that arrives was cocaine.

Twenty-eight of the homicides victims in SVG last year fell to gunshots and Hadaway said police believe that the killings are primarily a result of the trade in illegal drugs.

Speaking at the same press conference, Assistant Commissioner of Police, Frankie Joseph, who is responsible for crime fighting, said that he does not think that there is a need for regional assistance in fighting crime in SVG, as was the case with Vincy Pac in 2009.

Hadaway was also asked to comment on a case in which a Campden Park youth was jailed on Tuesday for possession of a homemade firearm.

The police chief, who is a weapons specialist, said he encountered homemade firearms many years ago when he was attached to the Special Service Unit.

“It is a way that the criminals who probably cannot get access to the manufactured weapons are using to provide the means to secure themselves, one way or the other. And most of these firearms are basically shotguns,” he said.

“It clearly shows that the police [are] committed to addressing the issue of crime and violence, and, more specifically, the issue related to gun-related activities,” he said, adding that these efforts continue in 2017, as evidenced by the gun bust on Wednesday, which included a sub-machine gun.