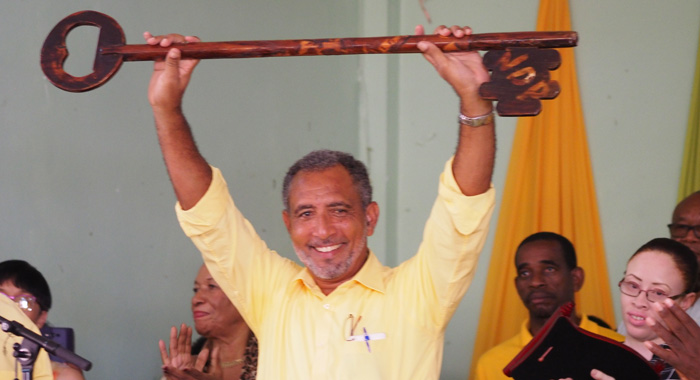 Will NDP President, Dr. Godwin Friday, have to hand over the party’s key to a new leader after just three months? (iWN file photo)

Will the post of President of the New Democratic Party (NDP) be subjected to a new election in February, two months after Godwin Friday was selected by acclamation to fill it?

Chair of the party, Linton Lewis, told iWitness News on Thursday that his understanding is that all posts on the NDP’s executive, including that of NDP president, should be open to new elections at the annual convention.

Well-placed sources tell iWitness News that the NDP will hold its annual convention on Feb. 5, three months earlier than announced.

Party leader Godwin Friday, who was elected at an extraordinary convention in November, will make the announcement on his weekly programme on NICE Radio on Friday, our sources say.

Lewis, who is overseas, told iWitness News that he was not at a meeting at which the NDP might have decided on the election date.

He said he could not confirm the Feb. 5 date, but told iWitness News that his understanding is that the convention would take place “very soon”.

The NDP chairman said all posts on the party’s executive are open to elections. When asked about the presidency, Lewis told iWitness News that his understanding is that Friday was elected to replace MP for East Kingstown, Arnhim Eustace, as NDP leader until the convention.

all posts on the party’s executive are open to elections. When asked about the presidency, Lewis told iWitness News that his understanding is that Friday was elected to replace Arnhim Eustace, until the convention.

Eustace stepped down suddenly as Opposition and NDP Leader last November, after 16 years in both positions.

The NDP convened an extraordinary convention on Nov. 27, at which Friday was selected as party leader, after his contender, MP for Central Kingstown, St. Clair Leacock, bowed out at the last moment.

Friday’s parliamentary colleagues had days earlier elected him Leader of the Opposition.

Lewis said the NDP will now have to decide whether Friday’s tenure will continue for three years — the term of an NDP leader — or if it would be renewed at the convention.

Lewis’ own post will be up for election, but the politician, who failed in four attempts to win a seat in the St. Georges constituencies, hinted at the extraordinary convention last November that he would not vie for a place on the NDP’s executive.

Among the offices up for re-election are two vice-presidents, including the post left vacant by Friday’s elevation.

Leacock is currently the only vice-president of the party.

Sources say that activist withing the party are lobbying would-be delegates to support MP for North Leeward, Roland “Patel” Matthews, as a candidate for vice-president of the party.

Observers are also watching to see how the apparent reconciliation between the NDP and its former senator, Anesia Baptiste, who Eustace fired from the senate in 2012, is progressing.

After being fired over an insulting letter she wrote to Eustace over an NDP policy about not speaking ill of other people’s religion, Baptiste went on the form the small Democratic Republican Party.

Observers say that Baptiste had a significant chance of being elected to Parliament if she had remained with the NDP. The DRP performed dismally in the December 2015 general elections.

3 replies on “NDP to elect new president at Feb. 5 convention?”