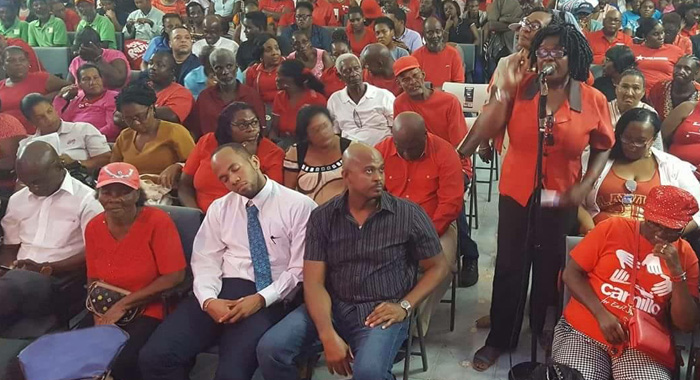 Minister of Health, Sen. Luke Browne (wearing necktie) at a Unity Labour Party event on Monday, hours after Prime Minister Ralph Gonsalves said no nurse was at a clinic when a grieving mother went there. (Photo: Facebook)

Prime Minister Ralph Gonsalves is raising questions about the management of the nation’s clinics after a mother found no nurse at the clinic in her community after her baby died Sunday night.

“And I am asking the management of the health system to make sure that at the clinics across this country, we have nurses there available all the time,” Gonsalves told a press conference on Monday.

Gonsalves said he had alluded to the situation publicly but was moved to talk explicitly about it after the development Sunday night.

He told a press conference on Monday that a 2-month-old baby boy died in his sleep Sunday night in South Rivers, a community in North Central Windward, which Gonsalves represents in Parliament.

The prime minister said that the woman, whom he described as “an experienced mother”, said she woke up and saw that the child was dead.

“So that even if there was a nurse at the clinic last night, it would not have solved that particular problem because she said to me that she hadn’t taken the child to the clinic… But when she saw the child was motionless, she went to the clinic and there was no nurse there because the nurse was, rightly speaking, on his weekend off. But a nurse should have been there,” Gonsalves said.

He said that while in that case, a nurse would not have been able to do anything, medically,  a nurse should have been at the health centre “just in case, that the circumstances were such that something would have been required to have been done…

“It may not have solved this one… I am not saying that it is the absence of the nurse at the clinic that contributed or caused the death of the child, because that is not what the mother said to me. I’m just saying how can you leave the clinic in South Rivers on a weekend without a nurse? And I repeat, the nurse up there is a good man, but he is a human being and he has to get leave.”

Gonsalves told the media that he had since spoken to the Chief Medical Officer and the Medical Officer of Health about the management and staffing of the nation’s clinics.

The prime minister said a practice has grown up that nurses who go into the community health services don’t want to stay at the clinics anymore.

“And it is true that some of the clinics, … the accommodation needs to be improved,” he said, adding that this is the fault of the Ministry of Health and the government.

Gonsalves, however, said some clinics have remained locked up and have deteriorated after they have been repaired repeatedly — “because some nurses want to treat the district community nursing services as if it is a civil servant’s job.

“You can’t close the clinic at 4:30 or 5, say you’re going home because you’re not staying at the clinic. Of course, you have been facilitated and you are paying the mortgage but you got a 100 per cent mortgage,” he said in reference to one of his government’s policies that allows some state workers to get 100 per cent mortgages.

“In an earlier period, before the 100 per cent mortgages, people use to love staying at the clinics. I’m giving you how I see it,” Gonsalves said.

He said it is unacceptable that a clinic is unattended because a nurse gets a weekend off, as was the case in South Rivers.

“And the management has to answer to that. And if you say you can’t get any nurse to go, well then, we need to review what we are doing. Because the fact is this, we must have people there.”

Gonsalves said that if in the case of South Rivers, for example, when the nurse must get his weekend off and a nurse is not at the Park Hill or Colonarie clinics, a person needing medical attention must go to the Georgetown Hospital

“I am making this appeal publicly to the management of the health system and to the dear nurses, whom I love very much, please, help us; help the people of St. Vincent and the Grenadines.”

Gonsalves said there are about 117 doctors in the state sector, nearly 300 staff nurses and a large number of other nursing staff, including nursing assistants and other nursing personnel, such as community aides.

“The Ministry of Health has a lot of personnel,” Gonsalves said, adding that he is told that there are a lot of nurses on leave.

“… we cannot have a system where nearly one-fifth of the nurses are on study leave,” he said, adding that he was given those numbers in a recent meeting.

“… I am very concerned about this problem and I have been talking about it and I have been alluding to it publicly, but I wake up this morning and decided that I had to talk about it.

Gonsalves said the story would be said that more nurses are needed.

“Of course, if you were to check the Public Service Commission, they would tell you that that is not the case. I’m sure, because I have had situations like this before, over my last 16 years here,” he said.