Our take it or leave it choice 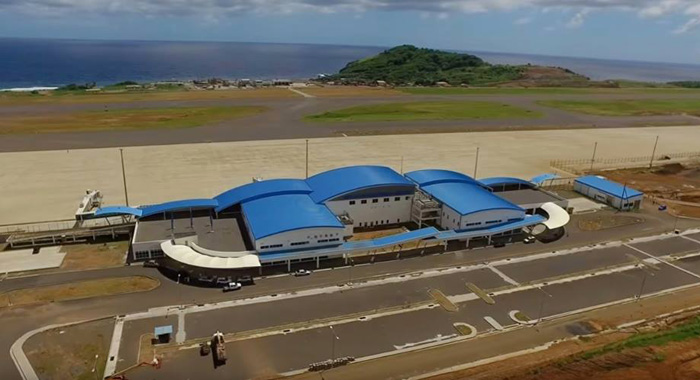 You know the saying about the “shitty end of the stick.” Well, both of ours ends are. From Arnhim to Godwin is, as another saying goes, from the frying pan into the fire. After — and during — 11 years of the ULP squeezing and wringing dry every drop of juice, every plot of political subterfuge that they could marshal from the airport project — which landed them the past three elections — a light seems to have gone off in Dr. Godwin Friday’s head. Eleven years too late, when it is all but done, the shiny new Leader of the Opposition is now declaiming that the ULP should not use the airport project for politics. Closing the barn door, doc?

Who awoke the sleeping maverick? And for why? And for what? To come up with that anachronistic gem? And he did not even talk tough. He couched his criticism in the wishy-washy “PR” instead of being blunt, calling it for what it is: “political complicity”. Still, it would be water off a duck’s back, so, perhaps just as well.

You do not have to read between the lines to understand why the dead-eye dick party is still in opposition — and will be for a long time to come. Does the leader have ears or eyes? Seems not; so, take a look at the pics, doc. Saying the obvious, that a public project should not be used for private gain is gratuitous grandstanding.

At the believer’s baptism at the Methodist Church (a poor choice of venue for this sort of thing) in 2005, a whole three years before the project saw pick or hoe, the Prime Minister said, “… the international airport will be an operational and functional reality by 2011” with the Gonsalvesesque icing “at the latest.” Ralph’s utterances depend on short memories. Why 2011? Well, in 2005, it was the carrot for the 2010 elections.

Did Dr. Friday think that the Prime Minister believed for one millisecond a little piece of “2011”. Or the definitive “at the latest.” Waay! Then Rudy woulda done get fire. Why is Dr. Friday on his high horse only now. Did he think at the time, and for the following eight years, that the Prime Minister uttered those misleading words — and more like it over the years — because he believed the airport was going to be “functional” by 2011? That planes and tourists would have been flying in and out five years ago? That Friday is moaning only now means that he did not realise “2011” was a deception — for sheer political expediency. Eight years? How slow can you be? It makes me ask: is the NDP a half-full or half-empty party?

Where, too, was Dr. Friday on groundbreaking day in 2008, when the unpatriotic Prime Minister was waving his not so little red flag like an elegy, a lament for the dead: togetherness. The ULP leader for the ULP eventually parked his party’s flag in the ground, a la Christopher Columbus, staking conceptual claim to Argyle. Once more, the red flag, like so many times before, was used like a chisel to split the people in half. And to think that the well-known blogger, C. ben-David was incensed that Glen Beache would wear red to further politicise the airport on “opening” day. There’d be countless civil servants wearing red that day hiding behind Valentine’s Day. It is what they have to do anyway. And job security is the lagniappe.

Then, where was Friday for the ULP’s flag parade on the eve of the groundbreaking? The time when they paraded the party flags tied on the airport equipment, every one piece, through Kingstown in the middle of a weekday, bringing traffic and all else to a halt? It was a circus. Clowns with their boom boxes singing and chanting labour love? Flags galore. Ethiopia’s among the plethora of reds, but not a sighting, nowhere, of the national flag. Where was Dr Friday for that ruse?

Friday would not be complaining this late in the game if he had taken time to visit Argyle. There, he would have seen the brazen, unscrupulous ULP’s eight-year (and still counting) “PR” exercise in full swing. Virtually every piece of equipment carried the squatters campaign stickers. A freeloader’s campaign; no stress on the war chest. Hell, they even hijacked the equipment that was donated by CARICOM – with the CARICOM logo still on them. The reality, Dr Friday, is that Argyle has been a veritable ULP shackland. Argyle was — and is — a ULP residence.

The horses them done bolt, doc. Too late to moan. Ralph and them done squeeze whatever juice they can wring from the project; right in your face. And now that his people done drink the sweetness and only hardship and disappointment lay ahead, Ralph, at the end of the bramble, suddenly wants to share. “I’m asking everyone … let’s make it work”. Now it’s “everyone” and “let’s.” Easy so. That man ain’t got no shame, dread.

On Valentine’s Day, the day people generally wear red, we are going to have the greatest show on earth: the opening of “The E.T. Joshua at Argyle Airport”, which they’d be selling as “The Argyle International Airport”. As usual, the masses are going to lap it up.

It is a travesty; a parody of what was to be expected. Aside from the cold Ju-C, hot roti, non-stop flights, and the first plane with 300 passengers for Buccament, here are some of the false hype. The first four from an article in Searchlight of November 2, 2012, headed, “SVGTA to name airlines flying into Argyle Airport”. It was, of course, all about airlines flying into Argyle and the “he” is Glen Beache.

“He added that the prospects are looking good so far.” (That far prospect is four years old.)

“‘It’s not a matter that we have targeted a selected few…once you are willing to come to the meeting table, we are willing to speak to you to keep our options open,’” Beache said. (Sounds like Beache is calling the tune and the airlines could to the dance — or not. It’s a matter for them.)

“An announcement is expected to be made by the middle of 2013, to indicate which airlines will be flying into the international airport at Argyle. Glen Beache, Chief Executive Officer of the St Vincent and the Grenadines Tourism Authority, made the announcement on Tuesday at a press conference.” (Update: now, the airlines would be doing the announcing.)

mention their names, because, obviously, they don’t want their competitors to know until quite late what they are engaged in,” Gonsalves said at an AIA symposium.’ ” (“Competitors”? Fighting to come? Obviously.)

Our Hobson’s choice is between Sleeping Beauty and Rasputinism.

One reply on “Our take it or leave it choice”