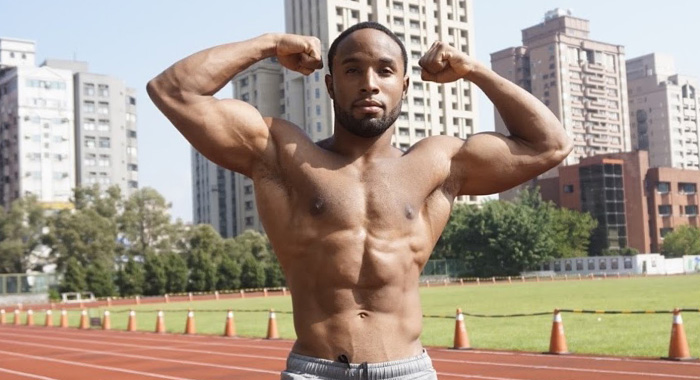 By Zuleika Lewis in Taiwan

In Taiwan, where venomous snakes bite about 500 persons annually, it would be wise to recoil if you see a cobra. But, a cobra of a different type is attracting much attention in Tawian, both on and offline.

The “Cobra” is the nickname of Vincentian student, 23-year-old budding bodybuilder Adriel Francois.

Francois was born in Belair to Gregg and Glender Francois, but later moved to Calder Ridge.

Francois, a graduate of the St. Vincent Grammar School, where he was an “A” student, was also head boy at the all-boys school. But, in Taiwan, he is realising not only his academic potential, but is also pushing his body to its limits.

Francois admits to iWitness News — a website which, coincidentally, also had its genesis in Taiwan — that he has always been interested in self-improvement in all aspects of his life and regards himself more as a fitness person.

“As far as I can remember, I have always had a very specific image of myself or at least what I would like Adriel to be. I enjoy self-improvement, so I have been working on my physical goals from since primary school, basically. I don’t really consider myself a bodybuilder. However, I would eventually like to craft my image into ‘Cobra the fitness guy’,” he said.

His motivation in sculpting a particular physique began during his formative years, with added inspiration from a number of Vincentian athletes.

“In terms of inspiration, I remember one of the first being my dad. He was always very strong and fit and I, from a very young age, aspired to be like him in the area of physical performance.”

Francois jokingly added that despite his advancements, to this day he is still unable to surpass his father in a 100-metre race and has accepted that as a reality.

He further added that, in high school, he was able to work with other young men who have helped in moulding his approach to fitness.

“Other persons over the years such as Devane Warner, Jadric Cummings, Courtney Williams, Alex Burgin among others have really inspired me in my early stages of my physique pursuits because they made my dream seem more tangible. Through their efforts in sports and individual training, I realised achieving the physique I want is very possible with the correct approach,” he told iWitness News.

At first, Francois’ journey began with “getting his nutrition right”, with a lot of proteins and fat-based foods while keeping his carbohydrate intake at a minimum.

His diet is complimented by 75 minutes training five times per week.

“I like to have a very balanced life. So I prefer not to have my entire day consumed in fitness and fitness related thoughts. Outside of that time I spend working out, I generally try to focus on other things like having fun and relaxing.”

In 2016, after years of coaching other persons and being encouraged by his close friends to do so, Francois entered the annual national university bodybuilding competition in Taiwan.

His win paved the pathway for a successful chain of events, including his record-breaking YouTube fitness channel, which broadcasts in both English and Mandarin Chinese.

“CobraCamp is basically a brand I am working on building. It promotes fitness, health and self-development and provides persons with very practical and simple methods in reaching their fitness goals.

“I have realised from my own fitness journey that it is very hard to find information and content. As a result, persons get frustrated and quit, get injured or waste a lot of effort for little results. I wanted to take everything I have learned and practised over the years and make it readily available to other persons like myself,” Francois told iWitness News.

CobraCamp’s YouTube channel has close to 20,000 subscribers and the 25 videos (12 in Mandarin Chinese and 13 in English) that have been posted have been viewed over 350,000 times.

He told iWitness News that most of his YouTube subscribers are from Taiwan but he hopes that his Vincentian audience would grow just as rapidly.

“I would really like to see us Caribbean people take up mediums like YouTube and put ourselves out there for the world to see. After leaving St. Vincent to pursue my studies, I realised how little the world knows of the Caribbean. I would love, through my work, to put the Caribbean and more so St Vincent and the Grenadines more on the map. So I am looking forward to the support.

“My Asian fans are out in their numbers, I would definitely love to see my Vincentian people do the same.

Francois, who is 5 feet 8 inches (170 cm) tall and weighs 80 kilogrammes/177 pounds is regarded as the ideal height and weight ratio for a bodybuilder, according to a well-known bodybuilding website. He plans on making daily improvements and taking his passion to other levels.

However, Francois has no plans of placing his education on the back burner and believes in “balancing” his books and his fitness regime.

“It is a challenge. I would admit it is not easy. However, something I have always reminded myself of is the fact that in life, you cannot have your cake and eat it. You have to choose the things you value the most and that which would bring you the most happiness.

“After you have done this, it doesn’t seem like much of a sacrifice because all the things in your life balance are the things that you value and bring you contentment. So yes, it is a challenge sometimes scheduling in my training sessions, however, the results I live with every day are worth it for me.”

While he is aware of some of the negative practices associated with bodybuilding, Francois assured iWitness News that he has taken the all-natural approach.

“Bodybuilding has been synonymous with the use of enhancement drugs but I am happy to say that I have achieved a physique worthy enough of winning competitions without even the use of supplements like protein powder, pre-workout and the host of other products that are marketed towards physical improvement.

“I think for quote unquote ‘regular people’ that are just trying to get to a level such as me or less, none of these things are absolutely necessary, learning the basics of how to eat and train well is all you need.

“Some of the biggest myths are that you need to work out for a ridiculous amount of time or be totally consumed with exercise to get to simple fitness goals and also that fitness is difficult and expensive. Following my CobraCamp YouTube channel will show otherwise. Simple, with profound results,” he told iWitness News.

But even with a chiselled strong exterior, Francois has his weakness: a sweet tooth.

“I love pastries, yup, I love cakes man, most of my close friends know the way to get Cobra excited is to feed him!”