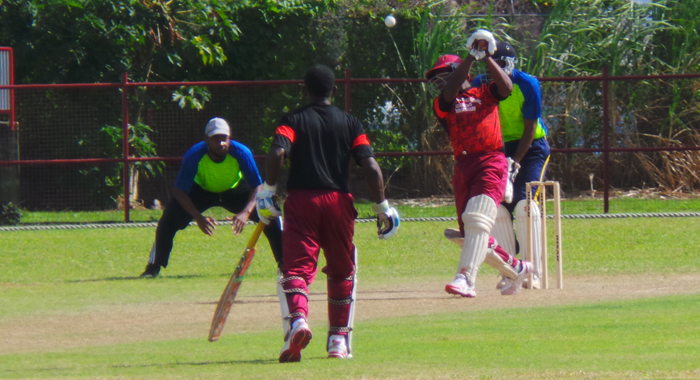 In 2014, Gidron Pope scored his first century in local senior cricket with a battling 122* for the now defunct News Spartans against Victors ONE at the main Arnos Vale Playing Field after his team had been forced to follow on.

On Sunday, playing for defending champions, FLOW Radcliffe against the same opponents in the NLA Neil Williams T20 competition, the bulky left-hander carved out a superb century (118) in helping his team to a nine-wicket win.

Pope who began slowly moved into a trot by carting pacer Shacquille Browne high over midwicket for the first of his twelve sixes and then moved smoothly into a canter then a gallop by the end of his stay at the crease.

He was badly missed at square-leg while less than 20 and made the fielding team pay heftily for that transgression.

It was felt that he was aided and abetted by the Victors ONE bowlers who constantly bowled a middle and leg line thereby allowing the batsman to consistently play on the legside — where he scored just over 90% of his runs.

Pope who had tongues wagging with his attacking play as a member of the West Indies U19 team, which won the ICC Youth World Cup in Bangladesh last year, ate ravenously of the sumptuous diet of half volleys and full tosses served up by the Victors ONE bowlers. He was kept in check only by the erstwhile Alston Bobb whose four overs went for 16 runs.

He added 164 with Romano Pierre (25*) for the first wicket, before skying a catch for Browne to take off his own bowling with six runs needed.

In all Pope lashed three fours to go with his twelve sixes while collecting his runs off the 61 balls he received at a SR of 193.44.

Earlier Victors ONE behind an even half century from captain Donwell Hector, Miles Bascombe 48 and Alston Bobb 32 reached a competitive 169/4 after overcoming the loss of their first wicket without a run on the board in a match reduced to 19 overs.

Bascombe who has been his team’s most consistent batsman so far this year,  took his tally for the season to 200 runs with another impressive innings in which he counted five fours and three sixes off forty balls. Hector who has struggled with form listed three fours and two sixes for his best score to date but could only look on helplessly from behind the stumps as Pope in his match-winning innings sent the white ball sailing into the sky like an ascending angel with breath-taking regularity.

Guardian General Saints who had already secured a place in the Super Six stage of the competition flexed their biceps with a 103 run win over Bequia Cricket Association at Arnos Vale TWO.

Guardian General Saints batting first got to 212 for 6 in their quota of 20 overs thanks to Seon Sween 37, Rickford Walker and Kenroy Peters 32 each and Vincent Cupid 30. Jenry Ollivierre 2/ 20 was Bequia’s best bowler.

The Grenadines team were then dismissed off the final ball of their 20 overs for 109 with Ollivierre getting the topscore of 31, as Kelon Davis grabbed 4/23 to lead Guardian General Saints bowling.

Providence Electronic Solutions North Leeward encountered little problem in securing a berth in the Super Six round with a convincing 119 run win over Belfongo on at the main Arnos Vale Playing Field.

Providence Electronic Solutions North Leeward piled up 206/6 from their 20 overs thanks to Ronique Laborde 89 and Shamon Hooper 62 who shared in a142 run third wicket partnership.

Joining forces at 26/2 at the start of the fourth over, the tall right-handed Laborde and the dapper left-handed Hooper took advantage of  what appeared to be a rudderless BELFONGO in compiling their partnership at just under 12 runs an over.

Laborde lashed nine fours and four sixes off the 44 balls he faced (SR 202.27) and Hooper innings was adorned with six fours and three sixes off 43 balls (SR 144.19) to see their team post a challenging score.

BELFONGO set to score at in excess of ten an over, never looked capable and were dismissed for 87 in 16.2 overs, with Kentish Phillips scored 20 being the topscore as Winston Samuel 3/11, Kemrick Westfield 2/18 and Allison Samuel 2/20 shared the wickets for North Leeward.

In other results: On Saturday at Sion Hill, Victors One defeated Combined Youths by 59 runs.

Combined Youths remained in contention for a chance of a place in the  Super Six stage with a four wicket win over Owia Stars.

Smashers defeated RW Sporting World SVG Community College by six wickets in a match which saw the rarity of two hattricks in the same innings.

In other games played on the weekend, Carl Joseph Law Chambers ASCO, got past the French Verandah SVG Community College by 17 runs on Saturday at Arnos Vale TWO.

Owia Stars had the better for Triumph United by 6 wickets.