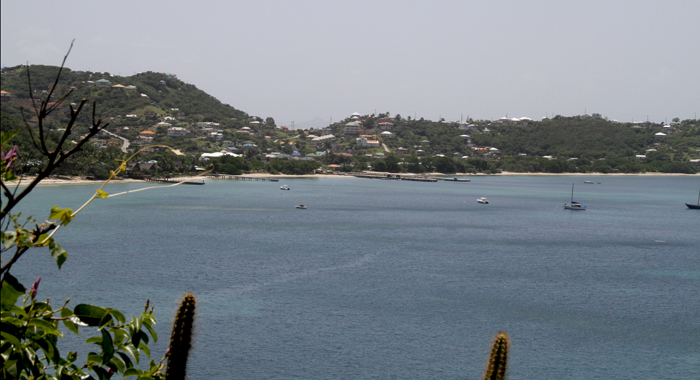 The local population on Canouan is sandwiched between the “developed” north and south of the island. (iWN photo)

Leader of the Opposition, Godwin Friday, says that he and other opposition lawmakers are in support of residents of Canouan in their quest to own more land and maintain public access to their southern Grenadines island.

Friday outlined the opposition’s position during the budget debate on Tuesday, in which he noted the importance to the Vincentian economy of the foreign direct investments taking place in Canouan.

“Mr Speaker, it is simply unfair for the concerns of the people, who raise them so vigorously, to be dismissed as the Prime Minister did in this very same article as some of it ‘being fuelled largely by a misguided arrogant chauvinism which argues that the land in Canouan is for Canouan people,” Friday said, referring to a 2013 speech in which Gonsalves explained that an additional 40 acres of land on the island would be sold to investors.

“In fact, the developers say that they didn’t even want to buy the land; that the government approached them and urged them to purchase it…” Friday told Parliament of the land that was sold to help finance the EC$700 million Argyle International Airport.

About two-third of the lands on the 1,800-acre island are in the hands of foreign investors who have built a resort in the north and a marina in the south.

Some residents of Canouan have been protesting for more than a decade and a half over access to beaches and other issues on the island.

Friday told Parliament of the “troubled history” of the situation on the island.

He said that since the first project was implemented in the 1990s under the New Democratic Party administration, there have been issues with the developers and the residents.

“The issue at its crux and what is continuing to create the problems in Canouan is the use of land, including beaches, and alienation. It is my view, and I will state it without water in my mouth here, Mr. Speaker, that the government should not have sold that additional 40 acres of land in Canouan to the developers.”

Friday said that it is said that the land was sold to help finance the Argyle International Airport.

“The issue is, Mr. Speaker, that very little land is left for residents in Canouan and then there are restrictions on the use of beaches and other areas without any proper explanation or consultation with the people living in Canouan.

“On these issues, Mr. Speaker, we have to make it clear where we stand. And I am clearly saying, Mr. Speaker, I stand with the residents of Canouan. And, by extension, [with] the people of this lovely country.”

Friday said that residents of Canouan are not unreasonable; adding that almost all of them agree that they need more land and beaches must always remain public.

“I notice this issue, the continuing dispute; it’s not addressed anywhere, not even in passing, in the Prime Minister’s [Budget] Address. And this is a very important issue.”

Friday said that no one is saying that the assets of the state cannot be sold and the money used for development.

He said all citizens must share in that burden and must equally enjoy the fruits.

“And this is precisely what I think the residents of Canouan are complaining about.”

He said development has to be development for the people or what would otherwise be the point.

“Development is not just building a grand structure and showing how fancy a project it can be. If it doesn’t benefit the people of the country, then what is the point?”

He said he was also not saying that no one in Canouan has benefitted from the developments taking place there.

“The point is, Mr. Speaker, that the balance has to be right.  And for many years in Canouan, it hasn’t been and it has created a lot of contention and too often, people are flippant and they dismiss it.”

Friday told Parliament that, over the years, vast sums of money have flowed into Canouan but the residents feel that they have not benefited to the full measure, given the scale of investment.

He said the roads on the 1,800-acre island are badly broken and access to education inadequate.

“I long for the day, Mr. Speaker, when I could see in the Estimates that there is a provision for a secondary school in Canouan.

He said that the government received US$20 million from the sale of the lands and an activist there noted that none of that was set aside for a secondary school, even as the area representative, Terrance Ollivierre, has been asking for this.

“Because the people of that community, they ask him to come to the House and request of the House that they deal with it, provide for secondary education in Canouan at least up to Form 3, so that young children don’t have to leave their homes and come up on the mainland and struggle and eventually drop out and go back to Canouan.”

He said most of the lands in Canouan are in the hands of developers.

“You look at the southern side as well, it’s like Canouan is a sandwich, Mr. Speaker, but all the meat is on the outside and very little is left for the people on the inside.  And this can’t, Mr. Speaker, augur well for peace and security in Canouan.”

He said the development in the north is spectacular and the marina in the south unparalleled in the Caribbean.

“And the developers don’t strike me as mean and wicked people. They have plans that they want to do to develop things around the community in Canouan, “ Friday said, adding that a lot of these things were heard before.
He said the people understand that the developments bring benefits but, at the same time, they see more lands being sold and restrictions imposed without proper consultation and education.   Friday asked why the government has allowed the situation to fester and get to the point where people have been arrested and charged.

“The matter needs proper attention and only the government can resolve it. So I urge that that attention be given and that it be given now,” Friday told Parliament.

One reply on “Opposition Leader sides with residents of Canouan”