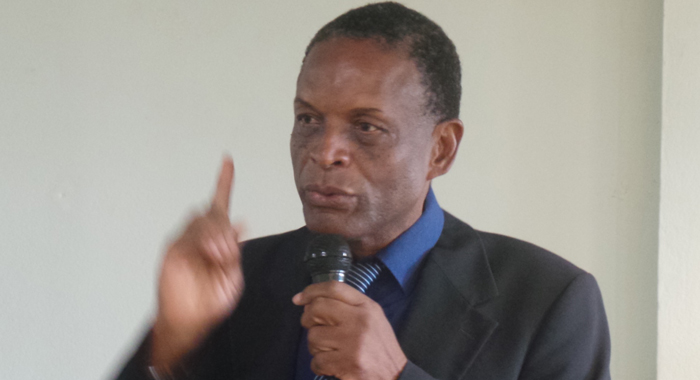 That was the opening paragraph of an article in the Searchlight newspaper of Aug. 14, 2009 written by Rohan “Roach” Thomas as part of his contribution to the sports page of that weekly.

The article was occasioned after comments were made about the position of the senior national team in the Coca-Cola FIFA Rankings in 2009, which stood at 157.

The team had seen an 18-month period of inactivity.

SVG now stands at 174 in the latest rankings, issued for February 2017.

Late administrator, Lawrence “Larry” Bascombe, who also felt that the FIFA Rankings were farcical and did not truly reflect efforts to develop the sport locally, also echoed the response from Delves.

Bascombe’s reaction was in part to an October 2007 ranking of 73 achieved by the country under a St. Clair Leacock-led administration with whom he had serious differences.

Leacock and his supporters never passed up the opportunity to flaunt the rankings in the face of anyone who questioned his tenure and his achievements as a three-term president.

Now, the debate over rankings, are once again a topical issue with Venold Coombs as president of the SVGFF and his opponents — many of whom he has defeated or candidates whom they supported in elections — appear to be given licence on what is perceived as an anti-Coombs sports segment to bash the president.

“These criticisms are not about football. They are more against me, Venold Coombs, as president and generated by those who are bitter over the loss they suffered at elections and their anger over what I have done for football in SVG,” Coombs said in response to the latest barrage of negative comments.

The president pointed out that while Delves was president of the SVGFF, the criticisms were mute and there were some whose writings were more apologetic and understanding and this, according to him, was based purely on “Delves being a lawyer”.

“Just look at what has happened over the years and you will see a clear pattern of a vendetta against me as president when you compare what happened under other presidents with regards to the managing of the Federation’s finances and the absence of any meaningful programmes and what I did. Yet every week all you hear is about rankings”.

Coombs pointed out that the system used by FIFA to rank member countries from when the rankings were first introduced in the early 1990s were changed towards the end of Leacock’s tenure and this has been responsible for the slide being experienced by SVG.

A July 2006 article on FIFA’s website confirms Coombs statement. It says, in part, “In Berlin today (6 July 2006), three days before the final of the 2006 FIFA World Cup™, FIFA presented the revised FIFA/Coca-Cola World Ranking. The new method will be applied immediately after this year’s FIFA World Cup™, with the first new FIFA/Coca-Cola World Ranking to be published on 12 July.”

The article, which quoted then president, Sepp Blatter, went on: “Transparency and simplicity – the key principles guiding the revision – have been combined with sporting criteria and statistical requirements to establish the new and simplified method of calculation that the FIFA Executive Committee ratified at its meeting in Leipzig, Germany, on 7 December 2005”.

It added: “The most important change to the calculation of the ranking is that it will no longer take into account the last eight years of results but only the last four. At the same time, all of the other factors previously taken into account (result, importance of match, strength of opponents, regional strength, number of matches considered) were tested, analysed and, in some cases, totally revised. In fact, two of the factors that were previously used (goals scored and home advantage) will no longer have any impact on the ranking”.

The above meant that the window which once gave SVG the privilege to fall back on some good results over a wider period was closed, thereby requiring more activity from a national team and a penalty such as the loss of points and demotion for prolong periods of none on-field engagements.

And Coombs highlighted the fact that even with the pre-2006 revising of the rankings, SVG, under Leacock’s presidency, was still ranked a lowly 170 in February 2004. In October 2007, this country also enjoyed their best position in CONCACAF, breaking into the Confederation’s top 10, as they were positioned at ninth, and third in the Caribbean Football Union’s (CFU) standings.

SVG, like all countries, have experienced fluctuations in the FIFA rankings, mainly in part due to lack of on-field action.

The team’s most active period saw them playing 19 matches in 2004, winning eight, losing six and drawing five, which saw them ending the year 137 in the rankings, but dropping as low as 170 over the 12 months.

In 1996, under a Louis Daisley presidency, SVG had 16 outings, winning three, losing nine and drawing four with a ranking of 93 at year end, 80 as the best and 95 the lowest.

The national senior team’s worst period, according to statistics produced by FIFA.com, was 2008 when the team played nine matches- recording a solitary win, losing seven and drawing one.

‘I will never dismiss the rankings as others did in the past, since I believe that it was introduced so that FIFA can gauge the standard of football in the member countries. But do not expect me to bankrupt the Federation to take the national team on globetrotting expeditions to satisfy the ego of some people as happened in the past,” Coombs said in an apparent reference to Leacock, who took the senior team to Brazil and England at a cost of thousands of dollars to the SVGFF.

Leacock, who is a Member of Parliament on the opposition benches, has, over time, attempted to pale the work of others while elevating his contribution to the advancement of the sport in SVG, according to Coombs who has taken serious umbrage with this.

The former president has labelled SVG “a failed state” and used the country’s FIFA ranking, among other things, to underscore his point and has also attempted to take all of the credit for SVG becoming a member of FIFA, offering that “Coombs only added icing to the cake”, something which has incensed the current holder of the office.

“I challenge St. Clair Leacock to bring forward the evidence to show the work he did to get St. Vincent into FIFA. He walked away from football in 1985, saying there was nothing in football and suggested that I do the same. But I stayed and started the process,” Coombs explained.

“I brought the president of FIFA Mr. (Joao) Havelange here and we were given provisional membership in 1987 and then full membership in 1988. We became a member of CONCACAF in 1986. Where were St. Clair Leacock and the cake then?”

Coombs said his work in the past as president in the 80s and 90s and since his return to lead the organisation in 2010 is well above and beyond what others have done.

He said that male and female teams are competing in senior and junior tournaments and this is something that was not happening before, since, according to him, there was no vision and no plan for development.

“This speaks for itself where we are taking the sport and we have as our main aim to develop the youths and we will do this with the funds we are getting from FIFA and CONCACA — not skimming it off. The television rights we collect as well will go back into the sport not collected secretly and no account given. I am not a dishonest man and the whole world knows Venold Coombs”.

Coombs also responded to those who feel that the SVGFF has an obligation to take media houses on tour when the national teams are involved in overseas fixtures as was done by the Leacock administration.

‘That certainly is not the responsibility of the Federation. While it was done before, that was a choice for reasons best known to who did it. We have no such obligations since they are entities with whom we do business. If they so much love football as they claim, then they should simply get sponsors and travel to the matches,” the president said.