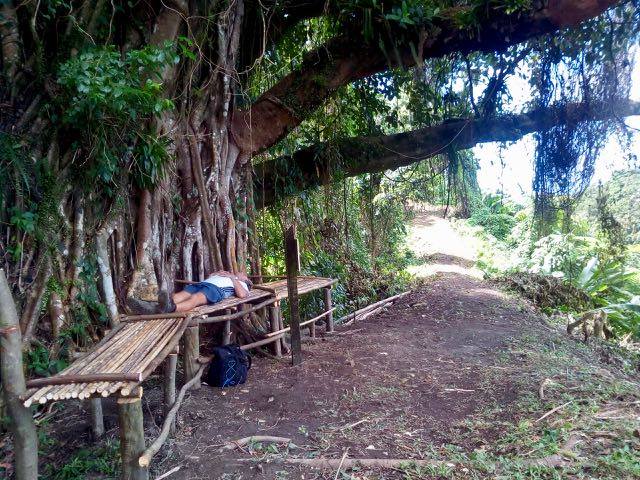 A section of the resorted trail.

The eco-tourism product in St. Vincent and the Grenadines will get a major boost this month with the Feb. 21 opening of the restored La Soufriere Cross Country Trail on the Leeward side of St. Vincent.

Richmond Vale Academy has worked with the National Parks, Rivers and Beaches Authority, the Forestry Department, and the Global Environment Facility (GEF) Small Grant Facility to restore the trail and teach eight communities in North Leeward about the importance of protecting the nation’s biodiversity.

The La Soufriere Cross Country Trail winds its way from sea level up to the top of the 4,048ft/1,178m volcano. The trail snakes across the width of St. Vincent, and can be walked from either the Leeward or Windward coast. The total trail is approximately 9 miles (15 km) long and offers visitors breath-taking panoramic views of the surrounding land- and seascape and close encounters with flora and fauna.

However, the Leeward trail had been affected by various weather systems over the years, including Hurricane Tomas in 2010, which blew down a number of trees and resulted in several landslides along the trail. The trail from the Windward side is rehabilitated and is thus in good condition. The Leeward trail is longer and was more difficult to hike because of the fallen trees.

Principal of Richmond Vale Academy, Stina Herberg, said that she is excited about the reopening of the trail.

“The trail is very important to the local population and the Vincentian economy as it is used for recreation and is a major part of the nation’s tourism product. With the improvement to the trail, hikers can expect an even more rewarding experience. Three lookout spots have been established and the midway point of the trail has been re-established and extended to be suitable for larger groups to stop and rest on the way to the summit.

“Additionally, 15 information signs are in the process of being set up, providing hikers with directions, advice and information on climate change, biodiversity and the history of the volcano,” Herberg said.

Steps have been re-established in areas that were steep and hazardous and trees and vetiver grass have been planted in two critical areas where landslides were very close to the trail. Volunteers and various resource persons also assisted in the rehabilitation process.

Herberg thanked all those involved in improving the trail and said that Richmond Vale Academy continues to look for opportunity to help St. Vincent and the Grenadines to adapt to and mitigate against the vagaries of climate change.

Herberg said: “I would like to encourage the general public to hike the trail on February 21, when it re-opens. The tour starts at the Wallibou Riverbed at Richmond Beach at 9:30 a.m. Regrettably, many Vincentians have never experienced this beautiful part of their country and we invite them to take advantage of this opportunity to do so.”