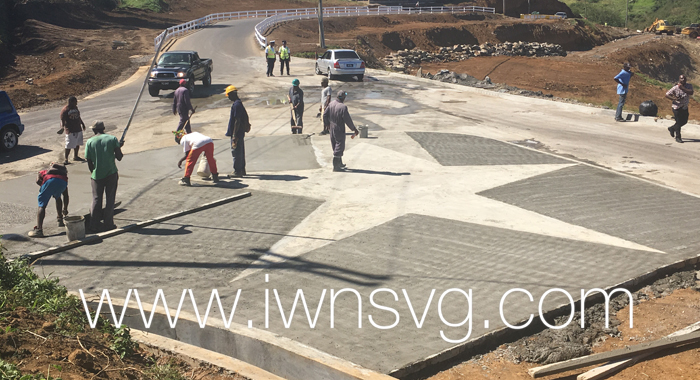 Prime Minister Ralph Gonsalves, on Friday, found himself on the defensive, trying to convince a radio audience that he and his Unity Labour Party (ULP) administration did not contribute to the politicisation of the construction of the Argyle International Airport.

The EC$700 million airport, which has contributed EC$400 million to the national debt, began operating on Feb. 14, six years behind schedule.

Speaking on Boom FM on Friday, Gonsalves said it was the opposition New Democratic Party (NDP) or their “surrogates” that “made partisan politics out of” the airport by attacking it “at every single turn”.

But that same morning, one local newspaper published a commentary by a member of Gonsalves’ ULP, who, in his weekly column, put some of the blame squarely at the feet of the party and the ULP administration.

“In conception and delivery, the ULP also tagged this national project with a heavy-handed party presence,” speaker of the House of Assembly, Jomo Thomas, a former ULP senator, wrote in his “Plain Talk” column in The Vincentian newspaper.

“From the ‘who e hut e hut’ parade of heavy equipment through the streets, to the massive star at the entrance to the airport tower, to the huge ULP flag at the official opening, the party has acted as though the airport belongs to its supporters rather than the people of SVG whose money it was spending for the construction,” wrote Thomas, who was a candidate for the ULP in the December 2015 general elections, but who has always given critical support to the party.

The prime minister’s comments came as he discussed last Thursday’s removal of a large star — the symbol of the ULP — which was cast in concrete near the control tower, one day before the airport was commissioned on Feb. 13.

Gonsalves had said from inception that it was wrong for the star to have been built there.

Responding to a question from iWitness News on Monday, he told a press conference that he had ordered that it be removed.

Gonsalves said on radio, on Friday, that he cared to find out who gave instructions for the star to be placed near the control tower, but said there are some things that people don’t find out.

“What I was more interested in, frankly speaking, was just concrete it over,” he said, referring to the process through which the star was eliminated.

During his radio appearance, Gonsalves, at one point, seemed to be attempting to equate the star with the “key” — the symbol of the NDP — that was formed by the design of the area where the plaque near the terminal building is located.

The “key” being discernible when viewed from a bird’s eye perspective.

He, however, admitted that the “key” was not deliberately created, adding, “But the point I am saying is this: people read things more than what they should read in certain matters.”

Gonsalves first announced the construction of the airport in August 2005 — four months before he announced a general election — in a speech he concluded by saying: “All this is realisable only with the ULP government. Without us, there will be no international airport. Only the ULP administration can deliver this. It is all so crystal clear. Let us face it: Which government, other than that of the ULP, can put together a “coalition of the willing” consisting of Cuba, Venezuela, Canada, Mexico, Taiwan, Trinidad and Tobago, to construct the international airport? Which other leadership can do it but the current leadership in the ULP administration? Today, marks the beginning of another chapter of immense achievement for our blessed homeland.”

But asked about the red flags that were flown from the equipment as they were driven from Campden Park to Argyle ahead of the commencement of construction of the airport in 2008, Gonsalves said they were to indicate the presence of a hazard.

“When you are transporting equipment, even one piece of equipment, don’t you have a red flag on it signalling danger?” he said, adding that 37 pieces of equipment were transported in the convoy and some of them had flags at the back, some at the front, and some on both ends.

The convoy of equipment also had police escorts.

But while Gonsalves’ explanation of the flags might find reason with some persons, it might be more difficult for him to explain away the playing of soca artiste Delroy “Fireman” Hooper’s “Who e hut e hut” during the transportation of the equipment, which occurred during work hours — possibly for maximum visual effect.

It was also pointed out to Gonsalves that ULP campaign stickers were placed on some of the equipment while they were in use during the construction of the airport.

“Don’t carry me places where an individual may do things which doesn’t have any  — the Argyle International Airport, at one point or the other, has 400 and something people employed. At the height of an election campaign, you may have one or two of them which decided that they are going to put sticker on what they are driving. The point about it is that’s not a government policy. That’s not AIDC policy,” Gonsalves said.

But the stickers remained on the equipment long after the election campaign and even to the very opening of the airport.

In further presenting his case that it was the opposition that politicised the airport, Gonsalves said that the opposition had accused him of being “crazy” in his pursuit of the project.

But Gonsalves has proudly and repeatedly related to the nation that Chavez had said that he (Gonsalves) was “loco” — Spanish for “crazy” — when he (Gonsalves) told him (Chavez) about his plan to build the airport at Argyle.

And while Caracas has provided one-third of the loans taken to build the airport, it has not followed through on what Gonsalves has said was its promise to pay the salaries and wages of the Cuban workers at the airport.

Gonsalves also defended his waving of a red flag when commencement of construction of the airport began, saying that the date, Aug. 13, 2008, was Fidel Castro’s birthday and also the birthday of Sir Vincent Beache, former minister of national security and director of the state-owned company that built the airport.

“Now, let me say this to you: without Fidel and Chavez and President Chen [Shui-bian] and the Taiwanese and Patrick Manning, to a lesser degree, that airport will not be there.

“So I know what was involved. So, from the very beginning, the NDP and continuing throughout until they changed their minds the Saturday before the Wednesday election in 2010, and immediately after, went back into attack mode. They opposed me getting the money in parliament.”

Gonsalves said that “absolutely not” did he help to fuel some of the division surrounding the airport.

In his newspaper column, Thomas was also critical of the opposition, saying that NDP founder, Sir James Mitchell, told the party that if Gonsalves finished the airport, they could forget victory for a few electoral cycles.

“The NDP bought into this non-scientific view, obstructed at every turn, refused to vote monies for the project, only for the leader to make the ridiculous claim in parliament that his party always supported the construction of the airport,” Thomas wrote.