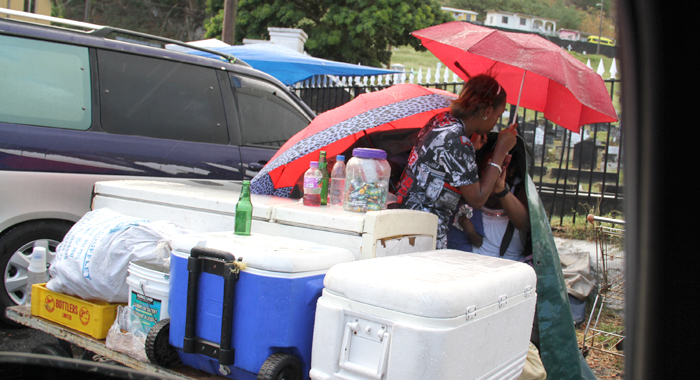 While icebox vendors use funerals and almost any other activity to make some money, one pastor says that he believes that the government should ban the sale of alcoholic drinks at funerals.

Bishop, Julius Louis, used his sermon on Sunday at the funeral of 19-year-old Aziza Dennie to make his case.

Dennie, along with fellow St. Vincent and the Grenadines Community College students, Daneé Deverey Horne, 18 of Questelles; and Carianne Lebrara Padmore, 18, of New Prospect, died in a car crash in Barbados on Jan. 29.

In his sermon, based on Ecclesiastes 7, Louis said he was not sure how many of the funeral attendees were truly aware of why they are at the funeral service.

He suggested that people would say they are there to give support and show solidarity.

But he quoted Ecclesiastes 7:1-4, which says:

A good reputation is more valuable than costly perfume. And the day you die is better than the day you are born. Better to spend your time at funerals than at parties. After all, everyone dies— so the living should take this to heart. Sorrow is better than laughter, for sadness has a refining influence on us. A wise person thinks a lot about death, while a fool thinks only about having a good time.

“I wish the government can find some place and bring something new in our constitution according to the law of the state of St. Vincent and the Grenadines and ensure that no icebox, no side road bars, when we should be focusing soberly,” he said, again quoting the Bible’s comments about funerals and festivals.

“And the devil is so subtle in his ways, oh my God, there are some people, they just listen for the obituaries and they just want to know where there is a funeral service and we get all the side road bars.

“It’s a set up. It’s set up. It’s the devil’s work,” he said, adding that when he was a little boy and there was a funeral service, shops would close and there would be days of sadness and mourning and there will be soberness of hearts and minds.

Louis said that worst yet is the number of iceboxes and sidebars at the cemetery waiting for the funeral.

“It must be stopped. The word of God is here to open our eyes, to clear our understanding. God did not say that at funeral service we are to have drinking and partying and selling the liquor.”

He quoted the bible as saying that a wise person thinks a lot about death but the fool thinks only about having a nice time.

“So I want somebody to tell me what is going on with these side bars. People want to come to funeral service and have a good time. The bible condemns that and I wish it stops [in] the soonest time possible,” he said at the funeral at Faith Deliverance Church, where a number of mobile icebox bars were selling alcoholic and other drinks outside.

Louis noted that the funeral service was not to speak to Dennie or the other two students who died.

“But all these things destroy organs in your body,” Louis said, adding that he was once a hard drinker and also smoked marijuana and cigarettes”