NDP urged to look for ‘attractive, intelligent’ women as candidates 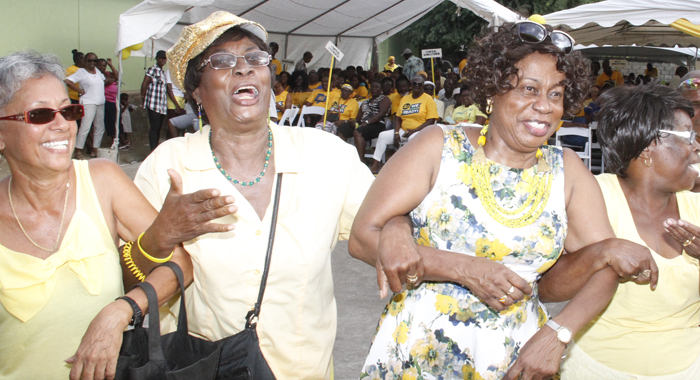 The main opposition New Democratic Party has been urged to look for “attractive intelligent women who have demonstrated their capacity before the public of St. Vincent” to run as candidates in the next general elections — constitutionally due by March 2021.

NDP founder, Sir James Mitchell made the point on Xtreme FM on Tuesday.

“Nothing is wrong with trying to get three, four, five women inside the party, because I think they can do with more women involved in the politics of St. Vincent,” Sir James said.

NDP president, Godwin Friday, speaking at a press conference on Wednesday, said that women “definitely should be given equal opportunity within the party and I have no problem with that sentiment”.

Friday said that this is something that the Commonwealth Secretariat and the Organisation of American States promote.

“It is a goal of everybody, I think, or any progressive mind would say that is a very good objective,” he said, adding that the NDP has not done very well in that regard.

He, however, identified Lavern King, who was elected NDP spokesperson in February as a young woman who has come forward to be involved in politics.

“We have other young women in the party who have taken very active roles and we encourage that and if it’s at the level of representations, that is something that will be desirable,” Friday said.

He said that ultimately, as a party that has been in opposition for a long time, the NDP wants to ensure that it has the best candidates to win.

“And if that is a woman, definitely,” he said.

Friday said the climate for women in the Vincentian political culture is more hostile towards women.

“And we have to ask ourselves why it is that capable women who have very good contributions to make in the political realms are reluctant to come forward. That is part of the difficulty as well,” Friday said.

The NDP has said it will field new candidates in North Windward, North Central Windward, South Windward, and Marriaqua.

In addition to King, Margaret London was elected to the NDP executive in February.

One reply on “NDP urged to look for ‘attractive, intelligent’ women as candidates”