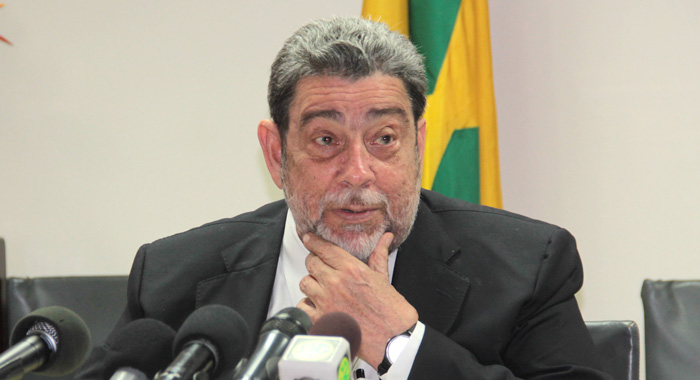 Prime Minister, Ralph Gonsalves, says that the Court of Appeal ruling on Tuesday that reinstated the main opposition New Democratic Party’s two election petitions is not a victory for the opposition.

“All what has happened, there was a legal skirmish in St. Lucia in the Court of Appeal, the court said there was an appearance of bias.”

Sitting in St. Lucia, the Court of Appeal moved to overturn a decision by High Court judge, Justice Brian Cottle to throw out the NDP’s petitions as improperly filed.

The NDP candidates in the Dec. 9, 2015 general elections, Ben Exeter and Lauron “Sheara” Baptiste, are asking the court to declare them the winners in Central Leeward and North Windward, or order fresh elections in those constituencies.

But Justice Cottle, last April, upheld an application by the respondents to throw out the petitions as improperly filed and the opposition appealed.

The Court of Appeal, sitting in St. Lucia on Tuesday, said that Justice Cottle had demonstrated apparent bias in his handling of the matter.

The appellate court ruled that Cottle’s order to strike out petitions be set aside and that the hearing of the petitions and motions to strike be remitted to the High Court to be heard by a different judge, expeditiously.

After the December 2015 vote, electoral officials declared the ULP winners of the polls, saying that it bagged eight of the 15 parliamentary seats while the remaining seven went to the ULP — a repeat of the December 2010 election results.

“Listen, the Court of Appeal, obviously doing the limbo,” Gonsalves said, adding that his government’s reaction to the ruling is not to curse the court.

He, however, noted that lead attorney for the respondents, Dominican Senior Counsel Anthony Astaphan, had raised questions about the decision of the court.

“… I accept the decision of the court of Appeal. We can centre our minds on dealing with the matter again before the High Court,” Gonsalves said.

Gonsalves said that as a lawyer, he is saying that the arguments for Sir Louis Straker and Montgomery Daniel, the ULP candidates in Central Leeward and North Windward, as well as Supervisor of Elections, Sylvia Findlay Scrubb and Attorney General, Judith Jones Morgan, are strong.

“I am satisfied as a lawyer that their arguments are one hundred per cent correct. They prevailed twice before Justice Cottle and I have no doubt that they will prevail again. So I am not worried. I am not worried at all,” Gonsalves said.

Gonsalves noted that, as prime minister, only he can call fresh elections and suggested that even if the government were to lose the petitions, he would call general elections rather than by-election.

He said that if fresh elections are called, the NDP is likely to lose in North Leeward, South Leeward, and East Kingstown.

Gonsalves said that Member of Parliament for North Leeward, Roland “Patel” Matthews as well as his South Leeward counterpart, Nigel “Nature” Stephenson, both of whom are into their second term, should worry about whether he would call an election before they qualify for pension.

The prime minister noted that three of his own party members, Augustus Stephenson, Saboto Caesar, and Cecil “Ces” McKie are also into their second terms, but said he is confident that they would retain their seats at the polls.