‘A wonderful victory,’ Friday says of reinstatement of petitions 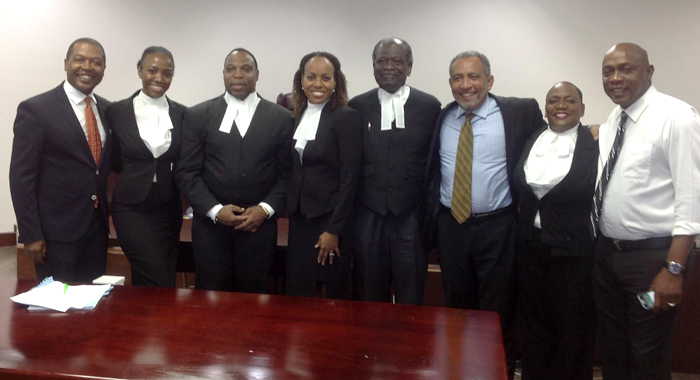 Leader of the Opposition, Godwin Friday has described as a “wonderful victory” the decision by the Court of Appeal to reinstate two election petitions filed by his New Democratic party in connection with the Dec. 9, 2015 election results.

“We are celebrating the wonderful victory had here today at the court of appeal,” he said Tuesday night in a call to NICE Radio from St. Lucia, where the appeal was heard.

“… we had a great victory in the Court of Appeal,” he said.

Friday, however, noted that with the petitions sent back to the High Court for hearing, that the matter is not yet resolved.

“I just want to tell the people of St. Vincent and the Grenadines that tonight is a night of celebration for democracy but is not time to let our guard down and think somehow the battle is won. It requires continued vigilance…” he told listeners.

Prime Minister Ralph Gonsalves said earlier on Tuesday said that the decision was “no political victory” for the opposition.

The Court of Appeal ruled Tuesday that a June 2016 decision by High Court judge Justice Brian Cottle to throw out the NDP’s petition was tainted by bias and ordered that the petitions be reinstated for hearing before a different judge.

The court also awarded costs to the petitioners at the lower and appellate court.

Citing electoral irregularities, the NDP candidates for Central Leeward, Ben Exeter, and North Windward, Lauron Baptiste, are asking the court to declare them winners in those districts or order fresh elections there.

If the court agrees with their arguments, the Unity Labour Party administration, which retained a fourth consecutive term in office by a single seat majority, could fall and fresh elections be called.

Friday said that the court’s decision has “vindicated the position of Baptiste and Exeter and, of course, all the hopes and dreams of the people who support their application, support the New Democratic Party”.

He said that, more importantly, “the people of St. Vincent and the Grenadines who are looking forward to justice and democracy in their country, that they have been vindicated, in that the petitions are now alive again and they can proceed on their merit to adjudication”.

“We are standing behind them one hundred per cent, we are so grateful to them for sticking with it and for going forward, fees or no fees, they have been there and they have been champions of democracy for the people of St. Vincent and the Grenadines,” he said.

Friday said that the lawyers have advised him that they are going to proceed vigorously, adding that the Court of Appeal said that election petitions must be dealt with expeditiously.

“One of the things that they (court) said is that this matter will go forward and it must go forward expeditiously. So, our lawyers are going to move as quickly as possible to prepare for the trial of the matter.”

The opposition leader said this means that whatever is required to prepare for the trial, they are going to make the necessary applications before the court.

“And we are going to proceed as quickly as possible so that it can be finally resolved for the people of this country.

“And we are quite confident, as we were today in the Court of Appeal, that when the matter is heard it will reveal that the elections in Central Leeward and North Windward were fraudulent and the people of St. Vincent and the Grenadines deserve to have free and fair elections in this country and that when is revealed, we must have elections at least in those two constituencies.”

Friday said that his position is that it taints the entire elections in 2015 and the government must proceed to have “free and fair election in this country as soon as possible”.

He said that Vincentians deserved that when they have a government they must have confidence that the people in office are the ones that command the support and the respect of the people whom they are supposed to be serving.

“We do not have that now in this country and need to have that resolved, otherwise, the people will continue to be restive and the government will not have the legitimacy that is required to govern properly. And so, we are hoping that with this situation we have now, that it will lead as soon as possible to free and fair elections in St. Vincent and the Grenadines.”

Electoral officials say that in the 2015 vote, the ULP won eight of the 15 parliamentary seats while the remaining seven went to the NDP.

2 replies on “‘A wonderful victory,’ Friday says of reinstatement of petitions ”