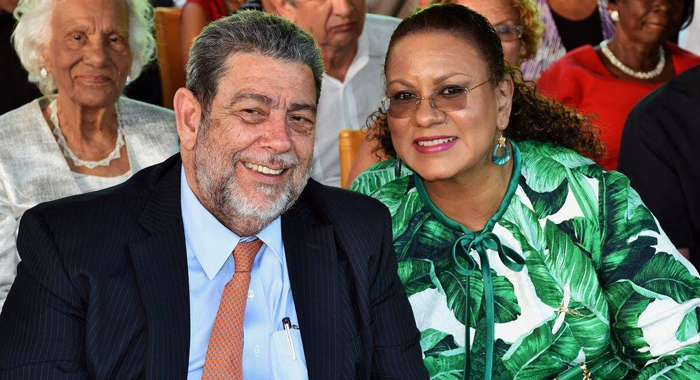 Prime Minister Gonsalves said this week that his wife operates the business along with businesswoman Camille Crichton, and Basil Charles of Mustique fame.

However, a document has emerged that shows that in addition to Mrs. Gonsalves and Crichton, Storm Gonsalves — son of the prime minister and his wife — and one Ginette M. Harris of Dominica are also directors of the company.

Mrs. Gonsalves’ maiden name is Harris, but iWitness News cannot verify that Ginette M. Harris is one of her relatives.

Some commentators have further noted that the concessions were granted by a cabinet chaired by Mrs. Gonsalves’ husband — the prime minister – and which includes her stepson, Minister of Economic Development, Camillo Gonsalves, and her cousin-in-law, Minister of Works, Sen. Julian Francis.

Mrs. Gonsalves, as chief executive officer of Caribbean Lifestyles & High Flyers, had applied to the Cabinet on Dec. 15, 2016 for duty free concession on equipment for a commercial kitchen and an 18-seater vehicle.

She was informed in a Jan. 24, 2017 letter from the Ministry of Finance — headed by her husband – that a 50 per cent waiver of import duty and value added tax on the equipment had been granted but the duty free concession on the vehicle was not approved.

Speaking at a town hall meeting in Langley Park Thursday night,  NDP chairman Daniel Cummings said that the government had granted the concession to Gonsalves while other people are suffering.

He said that he wanted residents of the North Windward community of Fancy to remember that the government refused to give duty free concessions for a bus for their community.

“Do you know what this ULP government said? No duty free concession for the bus that is required to take your children, to take your agricultural produce, to take your sick ones and to take you and to bring back produce from Kingstown to the entire windward section,” said Cummings, who, as a Member of the Rotary Club, had helped to source a bus for the community.

“They could not give duty free concession for such a noble cause but they could come when there was this unfortunate accident with KFC and wine and cry crocodile tears, but denying you the rightful duty free concession was not enough,” he said, referring to the Rock Gutter accident in which seven students died on Jan. 12, 2015.

“They must rub salt into your wounds by giving the wife of the prime minister 50 per cent duty free concession… Tell me, is that a government that cares about the people of this country?” Cummings said to shouts of “No!”

On Monday, Gonsalves commented on the duty free concession given to his wife.

His comments at a press conference in Kingstown came as he again urged persons in businesses that can benefit from the Argyle International Airport, which opened Feb. 14, but has not had any international flights since the return leg of a number of charters on Feb. 21.

“I mean, I was away and I heard this thing about the group which is involved with my wife, well Basil Charles and Camille Crichton. They have restaurant facility out there. Downstairs and upstairs,” Gonsalves said.

He said the downstairs facility “has no cooking, so in order to have downstairs, you have to take somewhere upstairs, too”.

The prime minister said there are other places on offer for rental for restaurants and other forms of business.

“And all these things were advertised. Some people would just write and say they have an interest but you have to go through the application process with all the information. You have to pay your deposit, you have to give your plan what you are doing and so on and so forth. And don’t wait until somebody does it. What you want to do is pull down people who investing their money, a lot of money too with high quality stuff and who get concessions in the way that everybody –it is available to everybody,” the prime minister said. “We have to stop this ridiculous approach to public affairs and to our development,” he further told the press conference.

Gonsalves said one of the reasons why people have not taken up the spaces is because they are considering how long it will take before they begin making money.

“You would have to have a commitment to this and you have to realise that this is not a short term business. You have to go for the longer haul. That’s the reality,” he said.