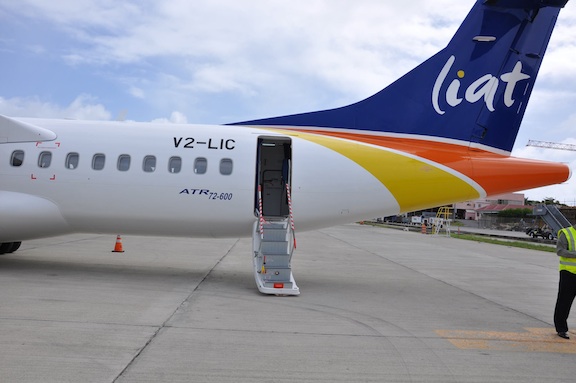 LIAT’s operations are being affected by the industrial unrest.

The major shareholders of cash-strapped regional carrier, LIAT, are expected to meet with a delegation from the unions representing the airline’s staff in Barbados on Tuesday in an attempt to quell the latest round of industrial unrest, which has begun to affect the airline’s operation.

The industrial action is a result of the late payment of wages and salaries, which LIAT’s management told the staff in a communiqué last week, is expected to continue over the next five months.

In a statement on Sunday, LIAT spokesman, Shavar Maloney said that the airline was advising the travelling public that it was experiencing “a number of delays and cancellations to our services due to industrial unrest.

“These current irregular operations may continue to occur over the next few days as we work towards resolving the issues. We advise our passengers to contact LIAT’s Reservations Team prior to leaving for the airport”.

The statement quoted LIAT’s chief executive officer, Julie Reifer-Jones as saying that “LIAT’s management sincerely apologises for any disruption to the travel plans of our valued passengers at this time.

“We remain committed to working with our employees to resolve the issues currently impacting the delivery of our service to the Caribbean”.

In a March 30 letter to David Massiah, chair of the Standing Regional Consultative Council of Trade Unions within the LIAT System (SRCCTULS), Reifer-Jones said that the airline’s major shareholders are willing to meet with a delegation from the unions “to have a structured discussion on the current financial position of LIAT, the industrial climate and the future of the airline”.

In a separate March 30 email to the airline’s staff, Reifer-Jones said that LIAT “is going through a difficult financial situation and has implemented a schedule of delays for salaries for all employees over the next five months.”

She said the financial delays are affecting all airline employees, including the executive team.

Reifer-Jones said the airline was proposing a five-month period as it expects that the situation should improve by the summer months.

“Scheduled payment arrangements have also been implemented for our lessors, engine manufacturer and general suppliers as we work through this difficult period.”

The chief executive said that the measures have implemented, “not as a result of disrespect for the employees but, in an effort to keep the company’s operations going.

“If the airline collapses, we will all suffer and the discussion changes from delayed salary to no salary and unemployment. This is the question we face today; how can we operate today so that we can continue to pay salaries in the future?”

The CEO said that the airline did not have any “funds hidden away which management refuses to use to pay salaries on time.

“Our Commercial Team is working relentlessly to grow passengers volumes and to improve our yield in order to make the airline profitable but these measures take time to have an impact and frankly they will only work if our- flights actually operate and if they are on-time.

“I know that this situation presents challenges for all of us and I want to thank all our employees who continue to work tirelessly despite the delays. It is this spirit of hard work and perseverance that will help us through these times.”

She pointed out that the discussions are scheduled for this, adding that she commits to keeping her staff informed of the outcome.

“I hope you understand that if the airline does not fly we will earn less revenue and this puts us in a more critical position than before. Our bookings for Easter have only just started to pick up and it would be a loss to all of us and to the Caribbean, as a whole, if we do not maintain this momentum. We must therefore continue to work together to ensure that LIAT continues to operate and serve the region to the benefit of as all,” Reifer-Jones said in a plea, which, apparently, fell on deaf ears.