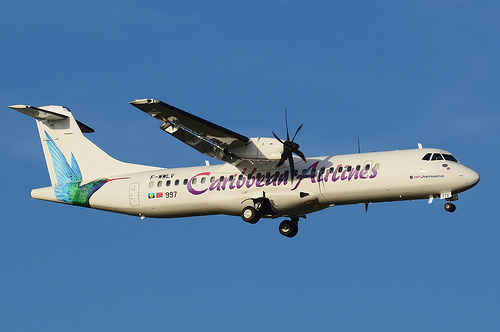 Tabia Matthews, a spokesperson for AIA, said in a brief press statement that the scheduled flights will operate on Fridays and Sundays.

Matthews said that the flight will offer “connections to their other North American destinations”.

She could not tell iWitness News what type of aircraft will be used to provide the service, but we understand that CAL will use its ATRs — the same type of aircraft operated by regional carrier LIAT — to ferry passengers to Port of Spain before they transfer to one of the airline’s jets for the flight to North America.

Matthews’ statement said that CAL has completed its operational setup and is currently conducting check-in, ticketing and baggage tests.

“Additionally, CAL is working towards opening a Cuban gateway, which will benefit a wide range of travellers, including students who are studying in Cuba. CAL’s cargo service is also expected to commence soon. The AIA team takes this opportunity to officially welcome Caribbean Airlines on board,” Matthews said.

Prime Minister Ralph Gonsalves had, in the past, objected to CAL flying the same route as LIAT because of the fuel subsidy that Port of Spain gave to its airline. But the subsidy was removed after LIAT secured a legal opinion that the subsidy contravened the Caribbean Community Treaty.

When CAL begins flying to Argyle, it would offer persons wishing to travel between North America and St. Vincent and the Grenadines another option, even as the government has, so far, failed to secure regularly scheduled or chartered flights to AIA, which opened on Feb. 14, after six years’ delay.

Also on Thursday, a group of private sector entities began advertising, on iWitness News, a carnival charter with return flights between New York and Argyle on July 1 and 13.

In Parliament on Thursday, Minister of Tourism, Cecil “Ces” McKie, responded in Parliament to a question from Opposition Leader Godwin Friday regarding the status of efforts to have international flights at Argyle International Airport.

Friday also asked McKie to say, in particular, which international airlines will be operating and which destinations they will serve?

McKie said that over the past few years his government has been negotiating with airlines with a view to have them serving SVG directly from international destinations.

“We have been fairly successful with these discussions and negotiations but I think that we are all aware of the fact that we cannot be premature in terms of our announcements of airlines coming to the destination, whether it be regular flights or otherwise. We have to make sure that we dot the I’s and cross the T’s and that’s what we will be doing,” McKie told lawmakers.

He further told Parliament that the government would be able to announce soon, arrangements with charters and otherwise for persons coming to SVG for carnival. Discussions are also being finalised for flights for independence celebrations in October and the Nine Mornings festival in December.

The tourism minister said the government has had discussions with British Airways, Virgin Atlantic, Thomas Cook and Titan airlines from the United Kingdom. From Canada, they have had talks with Air Canada, West Jest, and Transat. In terms of airlines from the United States, the government has spoken with Dynamic Airlines, Swift Air, Miami Air, JetBlue, Caribbean Airlines, American Airlines and Easy Sky.

He said the Transport Security Administration of the United States, which has visited AIA has done the necessary briefings with the management of the airport.

“They have already begun to put things in place to correct some of these shortcomings, that … have been pointed out and, as I understand it, within 45 days, we should receive the report from them.”

The minister said his government is also working along with airlines to receive the necessary clearance, if applicable, for them to fly directly to the destination “in terms of regular flights”.

McKie said his government is in discussions with various private entities about arranging charters.

“Preferably, we would like such arrangements to be organised by private entities. But, they also recognise the challenges and the difficulties, first to get aircraft and also the cost that these aircraft come at. And so, therefore, we are working closely with them to see if we can collaborate in any way, if we can offer support in any way, but, as it is now, the ministry is basically leading the charge in getting these charters in place.”

McKie, however, said the government welcomes private entities to organise charters of their own.

The Leader of the Opposition then asked the tourism minister if the charters were a business undertaking.

Prime Minister Ralph Gonsalves then interjected, noting that the budget for the Tourism Authority for this year was increased to EC$20 million, up from 15 million the previous year.

“And when you are promoting a jurisdiction, part of the promotion of that jurisdiction involves the very cost involving air transportation. That is the fact of life of the travel and leisure business…” the prime minister further stated.

“Let us not feed the idea that you can have international carrier come in without some kind of market support in whatever form that is taking place. All you have to do is to make sure that it is reasonable and it balances off with the economic benefits to the country: the creation of wealth, the generation of jobs. That’s the framework in which the debate has to take place in order for it to be an intelligent debate,” he said.