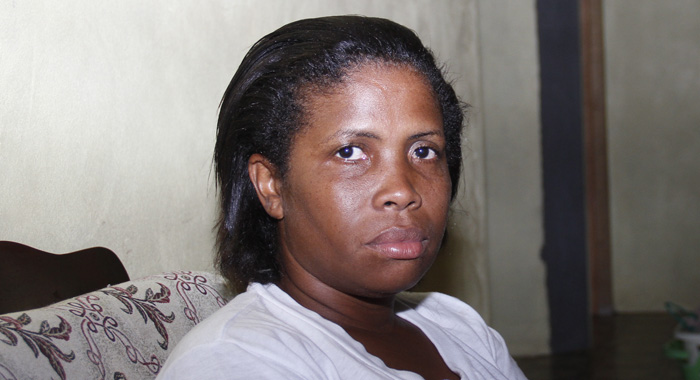 Nelsia Stay blames the driver of the minivan for the death of her child. (iWN photo)

The mother of one of the seven students who died in the Rock Gutter bus crash two years ago says she will forever hold the driver of the vehicle responsible for her child’s death.

“I was hoping that Davanan would have gone to High Court and would have spent some time in prison,” Nelsia Stay told iWitness News in Fancy on Sunday.

Her comments came two days after Chief Magistrate Rechanne Browne-Matthias upheld a no case submission against Nanton, 36, and co-accused, Ehud Myers, 67, in connection with the children’s death.

“I know his going to prison won’t bring back our children — that’s the comment that people are saying: ‘Would their going to jail bring back the children?’ That is foolishness. We know nothing would bring them back. But, for me, it would help my healing process in getting over the loss of my daughter. It would have helped all the parents in getting a sense of justice, that our children’s lives were not just thrown away like some animals or something.”

Stay’s daughter, Chanstacia Stay, along with Racquel Ashton, Glenroy Michael, Jamall and Jamalie Edwards, Simonique Ballantyne and Anique Alexander, died on Jan. 12, 2015 when minibus HL636 careened down a hillside and into the rough sea at Rock Gutter, an uninhabited area between Fancy and Owia.

Nanton, the driver of the vehicle, Myers, the conductor and pastor of the Fancy Apostolic Faith Mission Church, which owned the minivan, were each charged with seven counts of involuntary manslaughter in connection with the students’ death.

They were freed last Friday after Browne-Matthias upheld no case submission their lawyers made on their behalf at the end of a preliminary inquiry two weeks earlier.

Stay told iWitness News that while auto mechanic McKinley Roberts had told the preliminary inquiry that he could not remember the conversation he had with Nanton about the minivan, Roberts’ testimony at the coroner’s inquest — which was closed to the media — was very damning.

“That’s why I am so passionate about Mr. Nanton. He had a choice and he chose to drive it like that. And, for his mistake, his hardenness, we lost our children and that is very hard for me to cope with,” Stay told iWitness News amidst tears.

She used very strong words to blame Nanton for the death of the children. “That is how I will always look at him… No matter if he goes to seven courts and they set him free…. That is how I see it.”

She told iWitness News that the Bible book of Ecclesiastes says there is a higher judge.

“If for poor people there is oppression, anyone does us wrong there is never justice, there is one higher than that. And one of these days, we will still get our justice,” she said.

“I have not forgiven those who trespassed against me. Probably later down in the future. I can’t; I just can’t see that happening.”

She expressed her frustration with the outcome of the case, telling iWitness News:

“How could that be any justice? It’s not to say it was my child alone. It was seven of them and the case was just dismissed and they’re talking about forgiveness…”

In an interview with iWitness News immediately after Friday’s court ruling, Nanton again pleaded for forgiveness.

He noted that he, too, could have died in the accident, and had to be rescued after going into the water to help to save the children, not knowing that he had a large cut to his belly.

But Stay rejected the plea for forgiveness, saying,  “They said they haven’t done anything wrong. What are we supposed to forgive them for?  I would never forgive them. I could never forgive Mr. Nanton; because of him, my heart is broken. A space is there that can never be filled up and they go on with their lives and they get off…