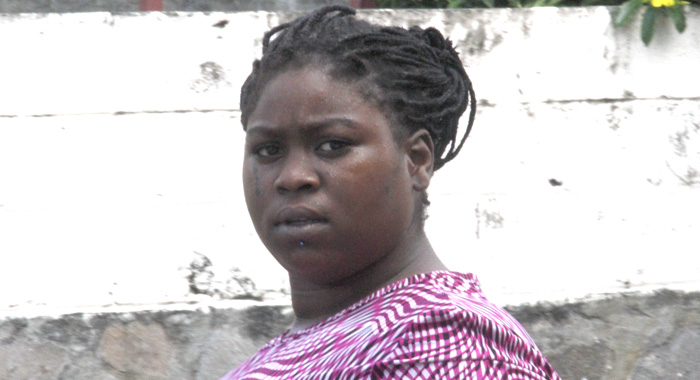 A 19-year-old woman was fined on Wednesday while a 16-year-old boy was sent to jail after they both escaped lawful police custody two days earlier.

A second boy, age 15, was sent to the Family Court for sentencing, having also pleaded guilty at the Kingstown Magistrate Court to the same charge.

The two males were on remand at the Questelles Police Station, the elder having been charged with robbery and the younger with conspiracy to commit robbery.

Denis Richardson, 23, of Glen, who was also charged in connection with that offence but was able to post bail, but has since been remanded in custody on a gun possession charge.

Bail was also open to the two young males but no one signed their bail bond and they were being remanded at the Questelles Police Station because they were 15 years old at the time.

A preliminary inquiry into that matter has been scheduled for May 10.

The woman fined for escaping custody, Kaysony Peters of Campden Park and Barrouallie, was being detained at the Questelles Police Station as part of an investigation into a damage to property report made against her by her boyfriend, Sean Roberts, of Barrouallie on Sunday.

The court heard that Peters had used a concrete brick to damage the windshield of her boyfriend’s minivan, HJ4, during an altercation in Barrouallie.

She also pleaded guilty to that charge.

Peters, along with the two males were housed at the Questelles Police Station, and when checks were made on them around 3 a.m. Monday, police discovered that they were missing.

The police organised a search party but the trio were not found. Later that morning, during daylight hours, the police found all three escaped persons at Peters’ home in Campden Park.

Magistrate Bertie Pompey ordered Peters to pay EC$350 for the damage to property charge and to pay her boyfriend EC$600 compensation for the damage to his vehicle. She was also ordered to pay the court EC$350 within one month on the escaping lawful custody charge or spend three months in jail.

All three accused were charged separately.

In handling the sentencing of the 16-year-old, Kelroy Henry, the magistrate said his hands were tied.

In presenting the facts to the court, the prosecutor, Station Sergeant of Police Elgin Richards, had noted that the accused was 16 and therefore could be housed at her Majesty’s Prison. He noted the seriousness of the offence and asked for a custodial sentence.

But before sentencing, Pompey asked the youth about his background.

Henry’s answers to the court show that he turned 16 while in remand on the robbery charge.

He said he is originally from Vermont and got to Form 2 at the Buccament Bay Secondary School before quitting because he did not have any money to continue his education.

From there, he went to the Liberty Lodge Boys Training Centre but has since taken up residence on the streets of Kingstown.

“I don’t like to send young people to prison but I don’t have any alternative,” the magistrate said.

Pompey, however, pointed out that he was not assessing the youth based on the initial charge that led to his being in police custody.

He, however, noted that because Henry was unable to secure bail on the first charge, community service was not an option.

“This is really a ticklish situation,” Pompey said.

After some discussion between the prosecution and the bench and an intervention by lawyer Carlos James, who was in court on another matter, Henry was sentenced to four months in prison.