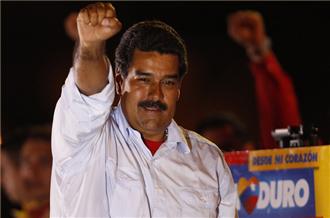 Leader of the 10-member Organisation of Eastern Caribbean States (OECS) and President of Venezuela, Nicolas Maduro have agreed to “an initiative that would advance peace, good governance and dialogue” in the South American nation.

“We will work appropriately to establish an appropriate mission to Venezuela,” Chair of the 64th meeting of the OECS, Prime Minister of St. Kitts and Nevis, Timothy Harris said in St. Vincent at a joint press conference with Maduro on Wednesday.
Maduro arrived in St. Vincent and the Grenadines on Wednesday for on an unannounced visit for talks with leaders, who were continuing their summit.
Earlier in the week, the South American leader attended, in Cuba, the Political Council of the Bolivarian Alliance for the People of Our America-Trade Treaty of the People (ALBA-TCP).

He seems to have attended the OECS Authority meeting in a bid to rally support amidst mounting political unrest at home and political pressure from the major hemispheric organisation.

The United States is among 14 of the leading nations in the hemisphere that have demanded that Caracas release political prisoners and make other pro-democracy concessions.

The Organisation of American States (OAS) has threatened to suspend Venezuela because of what it called the autocratic repression imposed by President Nicolas Maduro, the Los Angeles Times has reported.

Speaking at the joint press conference, Harris said Maduro provided an update “on matters of mutual interest including matters at home in Venezuela and issues related to recent development at the OAS.

“We were very much better informed as a result of his presentation to us and we had very candid discussion on our very strong relations with Venezuela and our commitment on issues of sovereignty, non-interference and rule of law.”

The OECS and the larger 15-member Caribbean Community, which often vote en bloc on issues, represent a significant force in the OAS.

Harris said that OAS leaders also discussed with Maduro a more constructive role to be played by the OECS to facilitate better dialogue, a reduction in tensions, and more collaboration in furtherance of the national interest of the people of Venezuela.
“The president readily agreed to an initiative that would advance peace, good governance and dialogue in Venezuela. We will work appropriately to establish an appropriate mission to Venezuela. Our member states did, in fact, express, finally, our deep gratitude and appreciation to president Maduro and the people of Venezuela for their kind consideration with respect to the relevant cooperative agreements we have long enjoyed with Venezuela over a whole of initiative – PetroCaribe, ALBA, etc,” he said.
Maduro thanked the prime ministers and member countries of the OECS for “the great opportunity to work together and strengthen their exchanges”.
“It’s been an extraordinary meeting today and it has been an opportunity to share and to update on various issues and to strengthen the cooperation between our governments and also, this has been an opportunity to open the path towards new possible opportunities to strengthen our economic, financial and trade relationships,” he said.
Maduro expressed thanks for “the whole hearted support” given by the prime ministers and the organisations to further dialogue, saying, “because it is through dialogue that we can find the path to peace, to sovereignty and to the well being of our peoples”.
He said he thanked the meeting for the initiative and the extension of their work to new areas, such as security.
“I thank you also for the renewed commitment in order to strengthen our air links, sea links, in order to strengthen trade between our countries. And in the same way, I would like to tell the governments and people of the OECS that to express our solidarity with all of you and also to reiterate our commitment that we have in order to further the region of peace, cooperation and integration.”
Maduro said that the region needs to continue to consolidate its space in order to achieve concrete results in concrete areas that are important for the population, such as trade, and development.
“We need to work very hard in order to make sure that this is an area where we have shared development based on solidarity, that we used this shared sea of the Caribbean as a link to strengthen our community, in order to achieve prosperity, stability and a good life for our people and this can only be possible through cooperation, solidarity and exchange.
“A new work is possible, but not only possible. It is urgent and every time we meet like this, we are making further steps toward the achievement [and] such a goal which is so urgent for our region and the world as a whole,” he said.
Meanwhile, host prime minister, Ralph Gonsalves, said he was pleased to have Maduro, “my friend and comrade from Venezuela” at the meeting.
Maduro landed at Argyle International Airport, which Venezuela has helped to finance, two months after a planned visit for the Feb. 14, official opening did not materialise.
Gonsalves said that he wanted even 20 minutes when Maduro returned to the airport “to show him what we have done there with the help of the Venezuelan government, both under the leadership of President Chavez and, or course now, under my brother, Nicolas”.

Harris told the press conference that the meeting discussed financing the work of the commission, the judiciary and the judicial system, issues of security, external outreach, and diplomatic missions.
Regional leaders also considered associate membership for St. Martin and provided guidance and following up on that initiative.

The meeting also discussed a stronger outreach into the African continent and in particular, developing strong relationships with the African Union as an entity and its member states.

Issues related to trade and, in particular, trade in agricultural goods and matters related to the blue economy and the sustainable use of the region’s oceans were also discussed.

One reply on “OECS, Maduro agree to initiative to ‘advance peace, good governance’ in Venezuela”