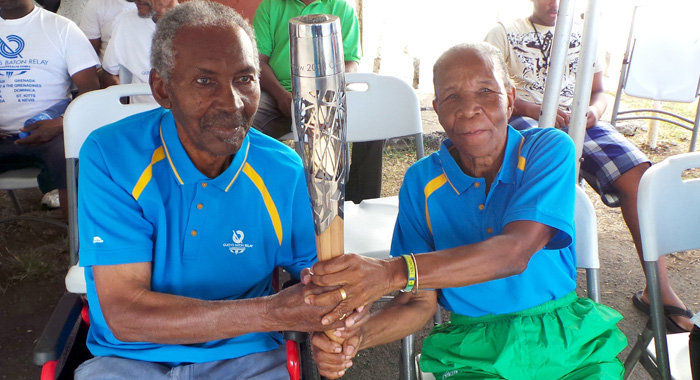 The late Elton Anderson, left, and SVG’s First lady of Sports, Gloria Ballantyne MBE at the completion of the QBR at Arnos Vale Sports Complex.

St. Vincent and the Grenadines will host a leg of the Queen Baton Relay, from June 3 to 7.

It will be the fourth occasion that SVG will be part of the historic and prestigious event, which was introduced at the 1958 British Empire and Commonwealth Games in Cardiff, Wales at which SVG was represented by a team that included the recently deceased Elton Anderson — a sprinter — who was part of the local leg of the QBR on two occasions.

Up until 1958, and including the 1994 Games, the relay only went through England and the host nation.

The Queen’s Baton Relay, similar to the Olympic Torch Relay, is a relay around the 71 member Commonwealth of Nations held every four years and ends with the official opening ceremony of the Commonwealth Games.

The Baton carries a message from the Head of the Commonwealth, currently Queen Elizabeth II. The Relay traditionally begins at Buckingham Palace in London as a part of the city’s Commonwealth Day festivities.

The Queen entrusts the baton to the first relay runner. At the Opening Ceremony of the Games, the final relay runner hands the baton back to the Queen or her representative, who reads the message aloud before officially declaring the opening of the particular edition of the Commonwealth Games.

The Relay for the 1998 Games in Kuala Lumpur, Malaysia was the first to travel to other nations of the Commonwealth. The 2002 Commonwealth Games Relay covered over 100,000 kilometres and went through 23 nations.

SVG had its introduction in the Melbourne 2006 Queen’s Baton Relay which at that time was the world’s longest, most inclusive relay, travelling more than 180,000 kilometres and visiting all 71 nations that then sent teams to the Commonwealth Games in one year and a day later.

The Gold Coast 2018 Commonwealth Games (GC2018) Queens Baton Relay which was launched on March 13th 2017 by the Queen is planned to be the longest ever. It will travel for 388 days, spending time in every nation and territory of the Commonwealth, covering more than 200,000 miles before reaching the Gold Coast. It will arrive on the Gold Coast for the Opening Ceremony of the Games on the April 4, 2018.

The Queen started the countdown to the 2018 Commonwealth Games, launching the baton relay at Buckingham Palace.

The Queen and other Royals marked Commonwealth Day with a service at Westminster Abbey.

The SVG Olympic Committee in keeping with the criteria of the GC2018 will be selecting persons to be part of the event who have fulfilled the simple requirements of: having achieved something extraordinary or inspired others to achieve something extraordinary; or have made a significant contribution to either sport, education, the arts, culture, charity or within their community; or have excelled, or aspire to excel athletically or personally; or contributed to a fun, friendly, vibrant and inclusive community.

The Baton for the GC2018 was designed by Brisbane-based company Designworks to reflect the local culture and life of Queensland.

The Baton arrives in St Vincent and the Grenadines from neighbouring Grenada and will leave for St Lucia.