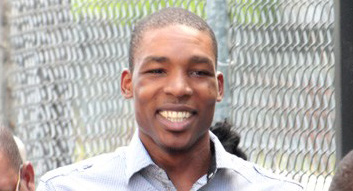 The man who was accused of shooting a police officer during the robbery of a postal worker in Kingstown in June 2013 has been arrested and charged with gun and ammunition possession.

Collin “Cocoa” David, a 29-year-old labourer of Long Wall, who has faced two murder charges and one charge for attempted murder, has been charged with having in his possession one 9 mm pistol and 36 rounds of 9mm ammunition, without a license issued under the Firearm Act.

The charges were brought against him after he was arrested in Kingstown on May 5.

Gershon Calvin Cole-Woods, a 37-year-old farmer of Belair, who was arrested with David, was charged with having in his possession one .38 revolver and 15 rounds of .38 ammunition without a license issued under the Firearm Act, at Kingstown on May 5.

The men were not required to plea to the indictable charges when they appeared before Chief Magistrate Rechanne Browne-Matthias at the Serious Offences Court on Monday.

They were each granted EC$50,000 bail with one surety.

They are to report to the Calliaqua Police Station every Monday, Wednesday and Thursday between 6 a.m. and 6 p.m. and a 7 p.m. to 6 a.m. curfew was imposed on each of them.

The court also ordered the men to surrender all travel documents.

Counsel Grant Connell is representing them.

Two years ago, David was freed of the May 5, 2015 murder of Jahjust Deveon Steele, who was shot and killed in Rose Place, hours after being released from police custody.

In 2012, David was freed of a murder charge resulting from the 2009 shooting death of fruit vendor Ashley Seymour of Long Wall.

David was also charged with attempted murder in relation to the shooting of Police Constable Julanie Jack, who was shot as he went to the assistance of a postal worker who was being robbed in Kingstown on June 13, 2013.

The postal worker was relieved of EC$102,000, which was never recovered.

David’s latest arrest comes four months after he was released from police custody.

In December 2016, he was charged with assaulting his child’s mother, but the woman told the court in Jan. 3, 2017 that she did not want to proceed with the matter.