How really did Camillo get IADC’s accounts from CIPO? 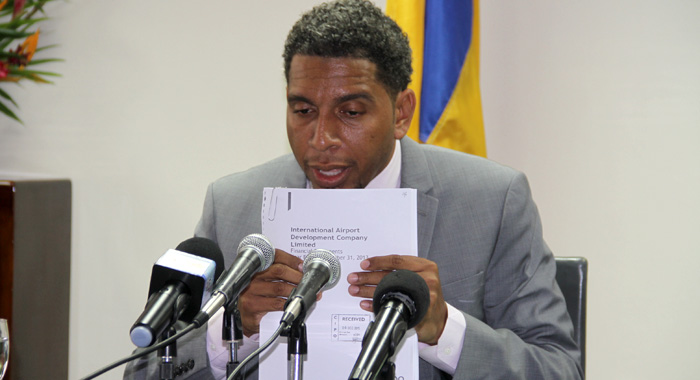 How really did Minister of Information, Camillo Gonsalves get these copies of the IADC’s financials. (iWN photo)

That might be among the questions that persons are asking after a press conference on Tuesday in which Prime Minister Ralph Gonsalves contradicted the story his Minister of Information, Camillo Gonsalves gave on April 28 about how he got copies of the International Airport Development Company’s (IADC) accounts from the Commercial and Intellectual Property (CIPO) office.

The information minister, speaking at the press conference, responded to an April 19 call by Opposition Leader Godwin Friday for the AIDC’s accounts to be laid in Parliament.

Camillo told the media that the accounts are actually at CIPO, in keeping with the law, and are accessible to any member of the public.

To strengthen his point, he said he had sent a member of the public there to get copies.

“I had somebody go to CIPO — not me — because I didn’t want anybody to say, well yes, Camillo Gonsalves, could get it, because he is a minister. So I had a non-minister go to CIPO and ask for the audited financial statements of the IADC,” he told the press conference, where he held up what he said were copies of all the IADC accounts lodged at CIPO.

But when iWitness News visited CIPO about two hours after the press conference, the Registrar of Companies, Lakeisha Caesar-Toney told us that we could not get copies of the 2011, 2012, and 2013 accounts, because they were “unregistered”.

Leader of the Democratic Republican Party, Anesia Baptiste, as well as political activist and radio talk show host, Margaret London, have said on Facebook that they had similar experiences at CIPO’s office.

In a press conference on Tuesday, Prime Minister Gonsalves attempted to explain what happened with the Minister of Economic Planning.

“The answer was very simple. There was nothing sinister and I had said it… Camillo had — he told me that he called the Registrar of Companies and said, ‘Look, I am sending somebody. I would like to have the accounts of the IADC, which have been filed.’ So, she does that.”

In response to the fact that iWitness News was not allowed to copy some of the accounts, the prime minister said:

“Apparently, when you went, you saw, which is understood, you saw a clerk, a clerical person there. They apparently have an administrative rule that even though you file it, which is required by the Companies Act, they have to do something called registering it. I haven’t seen that inside of the Companies Act… But these things were stamped received, stamped filed since December 2016, so, obviously there was an administrative delay on the part of they themselves.”

It was pointed out to the prime minister that the registrar herself had told iWitness News that the document could not be copied because they are “unregistered”.