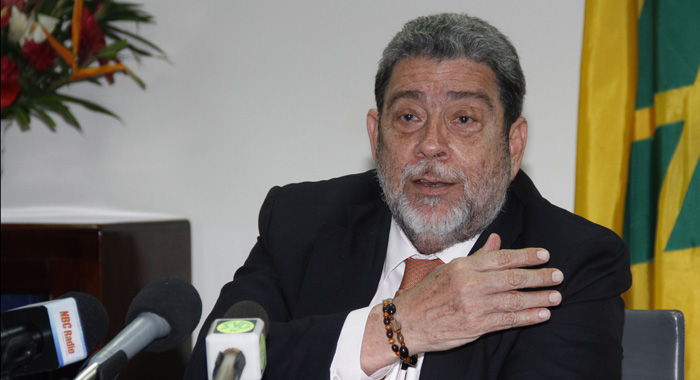 The comments that Opposition Leader Godwin Friday made about the International Airport Development Company being required to present its accounts to Parliament are false, Prime Minister Ralph Gonsalves said on Tuesday.

Further, Friday’s refusal to admit this is “a bit irritating,” the prime minister told a press conference.

In an April 19 press conference, Friday called on the government to account for the EC$700 million — EC$400 million of which are loans – it said it spent to build the airport.

But Gonsalves said that none of the sections of the Constitution or the law that Friday quoted in the press conference helped his position.

The government has said that since the IADC is a company the law requires that its accounts be lodged with the Commercial and Intellectual Property Office (CIPO) rather than Parliament.

Gonsalves said that Friday said IADC is a statutory corporation and that it should report to Parliament and since 2004, the government has not submitted any audited statements.

“And I am saying that all those things what Friday said were false and it is a bit irritating, I must tell you, in the face of such falsehoods, that a man would still maintain that he’s right.

“What do you do with somebody like that, other than being irritated? I can’t take off my belt and whip him, you understand what I mean?” he said, laughing.

“All I can do is be irritated that a man, he wouldn’t admit that, listen, this this is wrong what I said. I misspoke. Ralph caught me with my pants down, and metaphorically, I spanked him, not literally.”

Gonsalves said that in the press conference Friday quoted Section 13 of the Audit Act.

“And to show you that he didn’t understand, he referred in the same paragraph about National Properties Ltd., being a statutory body. From the time you see “limited”, you know it’s a company,” Gonsalves said.

“So he was off beam… He was so wrong, but, having caught him telling these whoppers, he tried to backpedal and trying to throw smoke.

“And I doesn’t matter how much smoke you throw, this is why I haven’t let up on this thing, because I know that I am in the right. And listen to me, these fellows can’t talk to me about accountability,” Gonsalves said.

He noted that he had stopped then Finance Minister Arnhim Eustace from paying then ambassador, Kingsley Layne EC$100,000, without audited accounts, for his claim when he was an ambassador.

Gonsalves further said that when he got into office in 2001, the British informed him that they had refused debt relief to the Eustace administration, for, among other reasons, the NDP government was not transparent and did not have a good record.

Gonsalves noted that his Unity Labour Party administration secured the debt relief, in relation to the Ottley Hall Marina.

He further said that the Finance Administration Act that his government passed is the most significant piece of law dealing with public finances and public accountability since 1960.