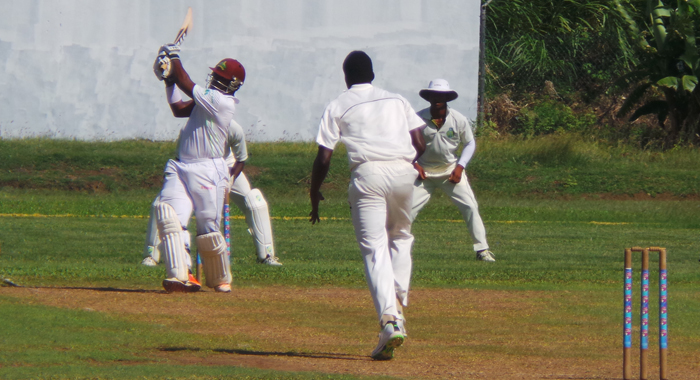 Gidron Pope got 82 for FLOW Radcliffe.

FLOW Radcliffe, batting first after winning the toss, declared at 200/7 on the back of a powerful half century by SVG top order batsman, Gidron Pope.

Pope came to the wicket in the second over after captain Lindon James (4), who had moved himself up the order, went with total on 8.

He began his innings in a watchful mode and did not hit his first boundary until his 15th delivery-pulling a short delivery through midwicket. The stocky lefthander, in partnership with opener Romano Pierre on a pitch “which was doing a bit”, kept their wicket intact, while moving the score along at a decent pace.

Pierre is a diminutive left-hander with a compact game against both spin and pace and able to play with ease on the front or back foot. On Saturday, in conditions that never totally allowed the batsmen to get the upper hand, he looked comfortable. Pope, on the other hand, regardless of the conditions, takes every opportunity to score and do so quickly, especially where the bowlers cannot maintain pressure. And this was the case with the inexperienced ASCO bowlers.

Wayne Harper (35) and Richie Richards (27) then added 54 for the fourth wicket and the breaking of this partnership saw 4 wickets going down the addition 5 runs resulting in FLOW Radcliffe closing their innings shortly after.

ASCO, who were missing a few of their experience players, were no match for the Radcliffe bowling and were bundled out for 99 in 27 overs. Their plight could have been much worse were it not for a well-played half century from the enigmatic Kelshun Dasilva. He made 58 with 3 fours and 5 sixes and was one of 3 wickets that fell for 1 run at the end of the innings. Offspinner Othneil Lewis 5/ 40 fully exploited the conditions with Lindon James 2/2 and Dyke Cato 2/34 also chipping in.

ASCO asked to follow on and keep a rampant Radcliffe at bay for 70 overs on a turning pitch, were only able to last 36.4 of those overs in being dismissed for 130. Darrel Sam got 36 as the veteran offspinner Dyke Cato (6/54) ripped through the heart of the ASCO batting with Richie Richards 3/28 also being part of the destruction. Set 30 for the outright win, Flow Radcliffe ended on 30 for 2.