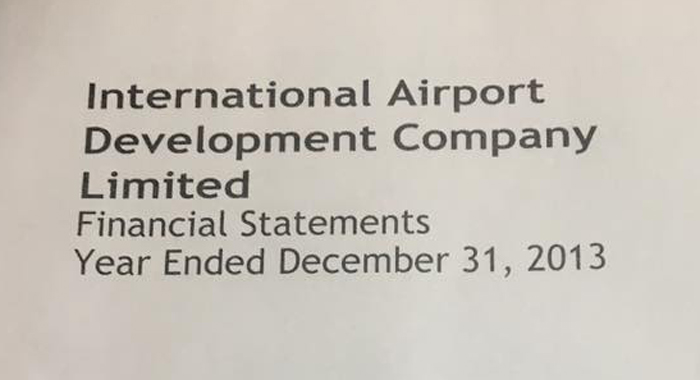 The Director of Audit can examine the accounts of state-owned International Airport Development Company (IADC) “in relation to what has been approved in Parliament,” Prime Minister Ralph Gonsalves said on Tuesday.

He, however, stuck to his position that the law does not demand that his government present to Parliament the financial accounts of the IADC, which was set up in 2004 to build the Argyle International Airport.

Leader of the Opposition Godwin Friday, on April 19, said that the government is breaking the law by not presenting the accounts to Parliament.

However, Gonsalves, noting that IADC is a company and not a corporation, said that the law requires that his government file the IADC accounts with the Commercial and Intellectual Property Office (CIPO).

Asked at a press conference on Tuesday if his government sees anything to be gained by submitting the accounts to Parliament, Gonsalves said:

“No. But you see, this is the point.  There are different regimes of accountability for statutory bodies and for state-owned bodies registered under the Companies Act.”

He said that the regime for companies is more stringent than statutory bodies.

AIA opened in February, six years behind schedule, and with a price tag of EC$700 million — almost twice what was estimated when the project was first announced in 2005.

The country has been left with EC$400 million in debt as a result of the construction of the airport.

Gonsalves, who is also Minister of Finance, pointed to the Estimates of Income and Expenditure, which details monies — including loans — that Parliament has approved for the IADC.

It was noted to Gonsalves, however, that the public knows what was disbursed and the rates of interest, etc., but want documentation to say the money was used as intended.

“When the Director of Audit does her general report, she will be able to see in that report which she is giving, she would be able to say that these monies were disbursed for that purpose.”

He said audited financial statements — which are lodged at CIPO — are made by the independent auditors of the company, under the regime of the Companies Act.

“If there is anything where the Director of Audit has any problem, if she has any suspicion of anything or even if she doesn’t have any suspicion, she can ask them for information.”

The prime minister said that under the Finance Administration Act, the Director of Audit could look into monies disbursed to any state-owned entity.

He further noted that the law says that the Director of Audit may examine and audit the accounts of a recipient of government money, in relation to the money received, to enable him to report as required by this act.”

“They are not auditing the whole accounts, they are auditing what’s appropriated,” Gonsalves said and

Gonsalves confirmed that the Director of Audit can look into the accounts of AIDC “in relation to what has been approved in Parliament.”

He said the Director of Audit can also have “access to information”, adding that while the regime for companies and statutory corporations are different, it is “not an inferior regime”.

“It is there for the world to see, including the politicians,” Gonsalves said.
Gonsalves quoted the Audit Act as saying the Director of Audit may, if in his opinion such an assignment does not interfere with his primary responsibilities, whenever the house of Assembly or the Minister so requests, inquire into and report on any matter relating to the financial affairs of the government, including, without limitation, its assets, a statutory body, a government owned or controlled corporation or a recipient of money and the like.

He commented:  “If I ask the auditor or the Parliament asks the auditor, could you report on this portion of money?  Could you do that for me? But if I don’t have any reason to do it, why am I to do it?”