Morocco demands apology for assault of envoy in St. Vincent 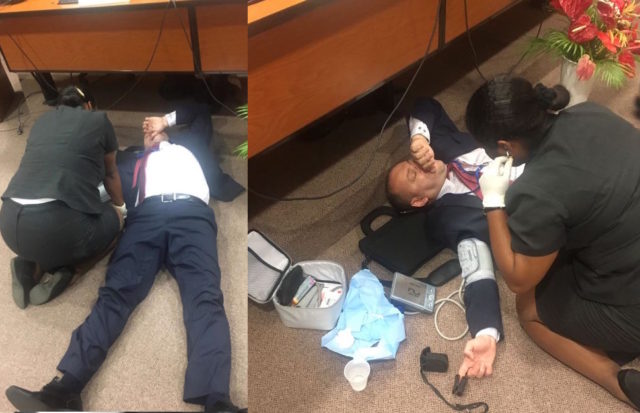 The Moroccan diplomat is assisted after the incident.

The delegate assaulted at the United Nations decolonisation conference in St. Vincent on Thursday has been identified as Moroccan diplomat Mohammed Ali El Khamlichi, who is based in St. Lucia.

El Khamlichi is the Deputy Chief of Missions for the Moroccan Embassy in Castries.

Photos taken at the scene of the incident at the National Insurance Services headquarters show the Moroccan diplomat lying on the floor, reportedly after being assaulted by his Algerian counterpart.

In the photo, the Moroccan is being attended to by a healthcare professional.

Another photograph shows a uniformed detective, an inspector of police, keeping a close watch as the diplomat was being attended to before being transported to hospital.

Kingstown has not commented publicly on the issue, but the nation’s police department prepared a report for circulation within the government and diplomatic channels.

Moroccan media, citing the police report, said that the incident occurred during an intermission on the final day of a three-day meeting of the United Nations Special Committee on Decolonisation.

According to the report, around 11 a.m. Thursday,

Soufiane Mimouni, the general director of the Algerian Ministry of Foreign Affairs, approached the Moroccan ambassador and a Caribbean diplomat who were engaged in conversation.

“Mr. Mimouni became aggressive and began to accost the Moroccan ambassador,” the report said, adding that as a result, El Khamlichi “intervened and told Mr. Mimouni to desist from assaulting the ambassador”.

The report said that the Algerian, becoming more aggressive, struck the Moroccan diplomat “on his face with his hand, resulting in an injury”.

After the incident, the Moroccan Diplomat was taken to Milton Cato Memorial Hospital.

The hospital’s staff concluded that he suffered “blunt trauma to the face”.

He was treated and discharged and the hospital said the diplomat was “in no acute distress” at the time of leaving the healthcare facility.

Morocco has demanded that Algeria apologise for the incident.

Wikipedia says that Algeria–Morocco relations have been dominated by several issues since their independence, particularly the 1963 Sand War, the Western Sahara War of 1975-1991, the closing of the Algeria-Morocco border in 1994, and the status of Western Sahara.

“The nation of the former colony of Western Sahara territory has caused a deep-seated antagonism and general mistrust between the two nations that has permeated all aspects of Moroccan-Algerian relations,” the online encyclopaedia says.

The incident took place during a meeting of the United Nations Special Committee on Decolonisation.

The Untied Nations General Assembly established the committee in 1961 and the committee annually reviews the list of territories to which the declaration is applicable and makes recommendations as to its implementation.

The meeting last week was held under the theme “Future for decolonisation in the non-self governing territories. What are the prospects?”

The meeting began on Tuesday with Prime Minister Ralph Gonsalves noting the importance of dialogue between territories and their colonisers.

“It is better to speak sharply to the truth as we understand it than to shoot sharply,” Gonsalves told the opening ceremony.