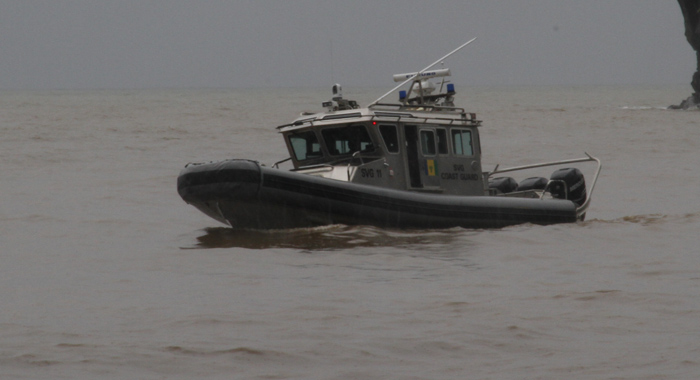 An SVG Coast Guard vessel during a search and rescue operation in 2016. (iWN photo)

Three days after six Vincentians went missing at sea after their boat began sinking between Canouan and Mustique, their relatives are still hoping that they would be found alive.

However, information from the Coast Guard suggests that hope is fading for the missing persons.

Further, questions are beginning to emerge about why it took so long for the Coast Guard to be notified after the person on the vessel in distress contacted at least one person in Mustique, notifying them of the situation.

The vessel — “Midnight Shadow” — a cigarette-type, dark blue (inside and out) speedboat outfitted with one 200-horsepower Yamaha outboard engine — was captained by Montgomery Hazel, 56, of Chauncey.

The other persons on board were Claudia Williams, 43, place of abode unknown; Ned Da Souza, 43, and his wife, 39-year-old Charmaine Da Souza, 39, of Richland Park, Sheron Simmons, 44, of Biabou, and Josianne John, age unknown, of Murray’s Village.

According to Lieutenant Ralph Ragguette of the Coast Guard, around 4:55 p.m. Sunday, John telephoned someone in Mustique Island, where they worked with the Mustique Company, telling them that the speedboat was taking on water.

The Coast Guard was not notified of the situation until 5:52, almost an hour later — shortly before dusk.

Ragguette told iWitness News on Wednesday that a third day of surface and air searches failed to turn up any sign of the vessel or its occupants.

He said that for a second day, the Coast Guard had received assistance from the Curacao-based Joint Response Co-ordination Centre (JRCC).

The JRCC supplied an aircraft, which searched for five hours on Tuesday and Wednesday while the local Coast Guard had two vessels participating in the search.

The searches have turned up nothing.

The occupants of the boat are said to have placed a distress call to someone in Mustique.

Asked about the one-hour delay in the information about the distress call and the Coast Guard being notified, Ragguette told iWitness News that he did not want to speak “out of turn”.

He, however, disclosed that the Coast Guard first call about the missing persons came from the security on Mustique.

However, the person in Mustique did not receive the coordinates for the vessel because of poor connectivity.

When the person on Mustique returned the call to the vessel, he is said to have heard the captain telling occupants to put on their lifejackets.

Ragguette told iWitness News that occupants of vessels should put on their lifejackets before the vessel leaves port.

He said that Mustique — a private island known internationally as a playground of the rich and famous—has a vessel that it uses for maritime security and used it to respond to the call from the vessel in distress.

But it would be an hour before security officials on the island would notify the Coast Guard, which always has a rapid response team on duty, specifically to respond to emergencies at sea.

Ragguette told iWitness News that, as with any emergency, the response time in a rescue operation is very crucial, in addition to getting information about the location of the vessel or person in distress.

He said that the person who received the distress call was unable to get the location of the vessel.

Asked if after 72 hours, hope of finding the missing persons alive was fading, Ragguette told iWitness News that the more time elapses before a person is rescued, the bleaker the chances become.

He said the search area has been expanded and search and rescue teams combed a large area, based on the information received.

The senior Coast Guard officer further told iWitness News that the marine conditions over the past few days have not been like normal.

“You can stay on shore and see what it is like out there,” he said, in reference to the rough seas.

He said swells were 2.5 metres (8.2 feet) in open waters and winds are gusty, which affect visibility.

Ragguette pointed out to iWitness News that the Coast Guard has continually been partnering with private sector entities to sensitise sea-goers about safety at sea.

He said that the Coast Guard has partnered with the National Telecommunications Regulatory Commission to source radio that has a special distress button, which, when pressed, sends the exact co-ordinates to the Coast Guard.

He further said that on the day that the boat disappeared the Coast Guard was called to rescue a fisherman whose boat had stalled.

The only safety gear that the fisherman had was a raincoat, Ragguette said.

Speaking to iWitness News separately on Wednesday, Seymonia Da Sousa, whose oldest brother, Nedd, and his wife, Charmaine are among the missing persons, told iWitness News that her family is doing “not good at all.

“Not good at all,” she repeated, adding, “My brother, he is my big brother. He is the first and I am the last child. He is like a father. I can always count on him,” Seymonia told iWitness News.

“I couldn’t ask for a better brother,” she said and described her brother as a kind-hearted person who would “give his soul to someone who asks”.

She said that Ned takes care of his parents, adding that their 62-year-old mother “is not coping well at all”, but their father is “grieving silently”.

“We miss him terribly,” Seymonia said.

She, however, said that her family is confident that their missing loved one is still alive and will be rescued.

“Oh yes. There is no doubt in our mind that they are alive,” she told iWitness News.

“He is alive. Everybody in the family believes he is out there, just waiting to be rescued. I don’t believe he is dead. He is out there fighting, holding on, praying for someone to come and rescue them,” she said, adding that the Da Souzas will celebrate their third wedding anniversary on July 5.