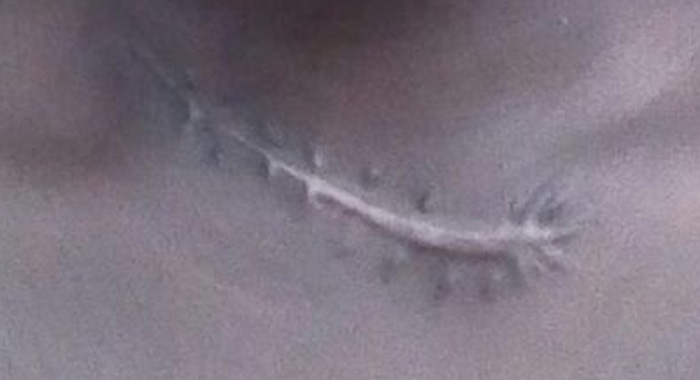 Idinga Bobb has been left with this nasty scar to her neck as a result of the attack.

A woman who was severely chopped and beaten by a man who attempted to rape her last Boxing Day wants to know why the man is yet to be arrested.

The woman, 29-year-old Idinga Bobb, said she is especially scared now after the man approached her in Kingstown on Tuesday night and asked her if she knows who he is.

Bobb told iWitness News on Tuesday that the chopping and attempted rape took place on Dec. 26, 2016 in Lower Questelles, where she was living at the time.

The mother of two said that she had never seen her attacker before the day of the crime.

Bobb, a security guard, who does not want her current address to be disclosed, said she was working in Lowmans Bay at the time of the attack and had left home around 5:07 a.m. to walk to work.

She said that while walking along the main road in Lower Questelles, she met a man talking with a woman and the man commented about her physique, but she ignored him.

She said that as she continued walking, she met a second man who asked her where she was from and whether she wanted him to accompany her.

Bobb said she declined the man’s offer and continued to walk.

She told iWitness News that she later realised that the man was walking behind her.

The woman said that she stopped walking and pretended to fiddle with her shoes to try to figure out if the man was, in fact, following her.

Bobb said that as she realised that the man was coming towards her, she attempted to run into someone’s yard, but the man grabbed her and said, “Come here!” and began beating her in her head and about her body with a cutlass and a stone.

She said the man told her to come with him into the bushes so that he could rape her, telling her that he would leave her after.

Bobb, however, told iWitness News that she told her attacker that if he was going to rape her, he would have to do it right there, and she continued to wrestle with him and screaming for help.

The woman told iWitness News that the man was trying to raise up her skirt, but he was unsuccessful in doing so, because it was tight.

She said the man then proceeded to chop her in her left hand, causing her to fall to the ground.

Bobb said that the man sat on her and she told him to take her bag, believing that he would leave her alone.

She said that the man then began looking in the direction of the road and she realised that a vehicle was coming.

The man ran away, and Bobb ran out into the road and attempted to flag down the vehicle, which didn’t stop.

She said that when the vehicle continued without stopping, her attacker returned as she ran into a yard and collapsed.

Bobb told iWitness News that a man came and shouted at her attacker, who dragged the cutlass along her neck, leaving a large cut, before running away.

She said she was so scared that she was going to attempt to run away from the man who had come to her rescue, but he grabbed her and told her he was there to help.

Bobb was taken to hospital, where she received more than 50 stitches to her hand and 20 to her neck.

She spent a week in hospital and was discharged on Jan. 2.

Bobb told iWitness News that she filed a report with the Questelles Police Station and the officers there keep telling her that they are investigating the case.

She said the investigators have said that person in the area say that they know the man but not his whereabouts.

Bobb told iWitness News that she has seen the man twice since the attack.

She said the first time was in Kingstown in January, when she noticed someone was pointing at her and she realised it was the man who had attacked her.

She told iWitness News that Tuesday night, the man walked up to her while she was waiting for a van in Kingstown and asked her three times if she knows him, then left.

Bobb told iWitness News she was too scared to leave where she was and walk to the police station so she called some friends, who waited with her until she got a van.

“He needs to be arrested,” she told iWitness News.

iWitness News became aware of the situation after a woman who had read a post by Bobb called it to our attention on the weekend.

We contacted the police who indicated that the matter is being investigated and that an additional detective has been assigned to the case.