One killed, another injured in shooting in Kingstown 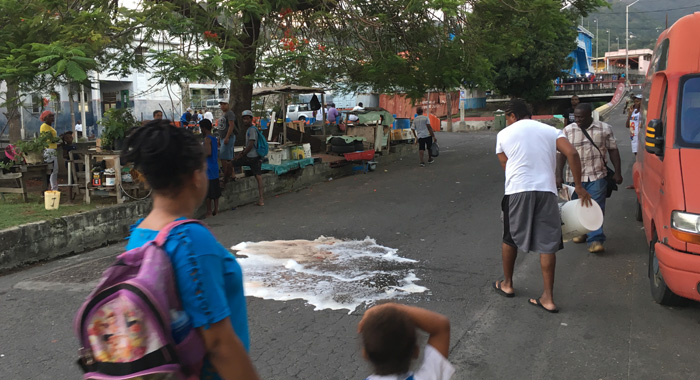 A man washes away blood from where Kemel Peters fell before being taken to hospital, where he died. (iWN photo)

A Green Hill man died in hospital Friday afternoon shortly after being shot in Kingstown, while another man shot at the same time was receiving medical attention for his injuries.

The shooting occurred on McCoy Street.

A source close to his family said that the dead man is Kemel Peters.

Peters survived a shooting incident just under a year ago when an Ottley Hall man trained his gun on him and Chateaubelair Resident, Aaron Delpesche at Lower Bay Street, Kingstown.

Police are yet to disclose the identity of the other man who was injured in Friday’s shooting.

They have also not commented on his condition, saying only that he was being treated at the Milton Cato Memorial Hospital.

Witnesses say that Peters was shot by a number of unknown assailants who fled the scene in a motor vehicle after the shooting.

Last month, Ottley Hall resident Karon “Twin” Bowens, 26, was jailed on a number of firearm charges, related to a July 4, 2016 incident in which he shot at Peters Delpesche at Lower Bay Street, Kingstown.

Delplesche was injured in the incident.

Friday’s shooting brings to 13 the number of homicides in St. Vincent and the Grenadines for 2017.

The incident also brings to three the number of persons in St. Vincent and the Grenadines struck by gunshots this week.

Wednesday night, 19-year-old Denika Samuel of Ottley Hall was shot in the neck at a bar in Ottley Hall.

She survived her injury and was taken to hospital.