Jail for man found with gun near Chief Magistrate’s home 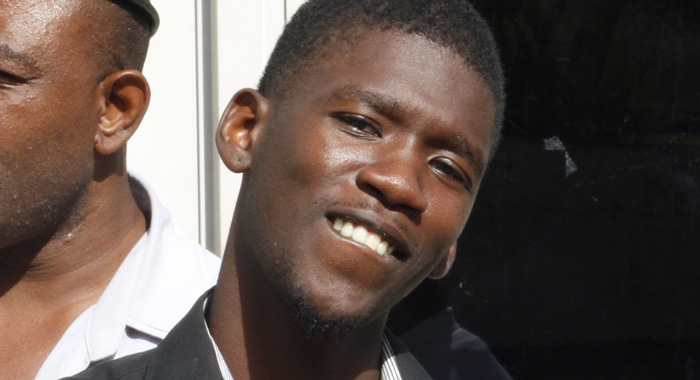 Hesron Phillips, 24, will spend the next three years in jail for gun possession. (iWN photo)

A 24-year-old man from Enhams posed for iWitness News as his photo was taken outside the Kingstown Magistrate’s Court on Friday, shortly after he was sent to jail for three years for firearm possession.

The man, Hesron Phillips, was found guilty of possession of a semi automatic pistol without a license on March 1, 2017 in Fair Hall.

The gun was found around 4:55 p.m. that day under the passenger seat of PE 353, a white Toyota Corolla car belonging to Phillips’ cousin, Daryl Frederick, which was parked just outside the driveway of the Chief Magistrate Rechanne Browne-Matthias’ home.

Frederick was the driver of the vehicle and Phillips was the passenger when the unloaded weapon was found in the car.

The case, which was heard by Magistrate Bertie Pompey, hinged on the testimony of Station Sergeant of Police, Duane Bailey.

Defense counsel, Israel Bruce, rejected the closing submission by the prosecutor, Station Sergeant of Police Elgin Richards that the Crown had proven its case “beyond doubt”.

Bruce argued that the Crown had not proven its case beyond even reasonable doubt, noting that the defendant and Frederick had said that Colin “Cocoa Tea” David had been given a ride in the car earlier and had sat in the back seat of the vehicle.

David, who has been charged with gun related offences in the past, was also taken into custody that day, but was not charged in connection with that firearm.

Bailey told the court that having received certain information, the party of police officers on mobile patrol that he was leading went to the area in Fair Hall.

He said that they were travelling in a twin-cab police pick-up truck, and he was seated in the front passenger seat, while there were officers riding in the pan also.

He said the police driver pulled alongside the parked car, PE353, and he (Bailey) leaned over the driver of the police vehicle and saw Phillips appear to be putting something under the seat of the car.

Bailey said that police found nothing illegal on the men’s persons, but found the gun under the front passenger seat of the car.

Initially, both Phillips and Frederick were jointly charged for possession of the weapon, but the case against Frederick was withdrawn.

During cross examination, Bailey told the court that he was not implying anything by the fact that the car was parked outside the driveway of the chief magistrate’s house.

His comments came in response to a question from Bruce, who said he realised that “the particular line is to make it more sensational”.

Bailey said that while there is another house in the area, he does not know who lives there.

He further maintained that the defendant did bend down and appeared to be putting something under the seat when he saw the police vehicle approaching.

He said that David was questioned about the firearm after Phillips and Frederick told police at the Central Police Station in Kingstown that they had given him a ride in the vehicle.

The other material witness for the Crown was Police Constable Durrant, the arresting officer, who said that she did not see Phillips bend down at any time when the police stopped alongside the car.

Durrant, however, told the court that while she was looking at Phillips all the time, she also saw when Bailey exited the police vehicle and go over to the car.

The junior police officer also denied that Phillips had said that the weapon was not his. She told the court that when cautioned, neither Phillips nor Frederick said anything.

Phillips testified in the matter, telling the court that he had gotten a ride from his cousin after playing football at the Enhams Community Centre.

He told the court that he did not have a backpack but had his shoes that he had played in but was wearing slippers in the car.

He said that Frederick was going to his girlfriend’s house in Fair Hall to take her to Yambou.

On the way, they met David, to whom they gave a ride.

Both men said they did not know David well.

Both Phillip, and Frederick, who also testified, said that they stopped at Mama’s Corner, and David re-entered the car first.

Frederick said that Phillips did not have anything in his hand when they re-entered the vehicle.

They said that when the police met them, they were waiting for David, who had gone to see someone.

After hearing closing submissions, Pompey found that Phillips was in physical possession of the weapon.

He said the issue was whether the defendant knew that the gun was there.

The magistrate said that this rests on whether Bailey’s evidence was to be believed, adding that he believes the police officer’s testimony.

Pompey said that Bailey and Durrant were looking at Frederick from direct perspectives and could have seen different things.

He found Phillips guilty of possession of the firearm, adding that whether he owned the firearm was besides the point.

In mitigation, Bruce noted that his client had never been charged with any offence adding that he has chosen to sell meals in Kingstown rather than going into the hills to plant marijuana or engage in other illegal activities.

The magistrate said he had taken into account Phillips’ youth, adding that that was as far as the mitigating factors went.

Pompey said he was also taking into account the prevalence of gun-related offences in St. Vincent and the Grenadines, adding that at the time, there were already 12 homicides in the country this year.

He said while he was not blaming the defendant for these crimes, he also noted that guns were used in most of these killings.

“I am very reluctant to send first-time young offenders to prison,” the magistrate said, adding, “I wish I did not have to send you to prison.”

He sentenced Phillips to three years in prison, saying that the sentence was because the weapon was not loaded.

Pompey noted that the law provides sentences of up to seven years in addition to fines of up to EC$20,000 for gun offences.

“That’s how serious it is,” the magistrate said.