Man jailed for stealing $60,000 in cash, goods from Kingstown stores 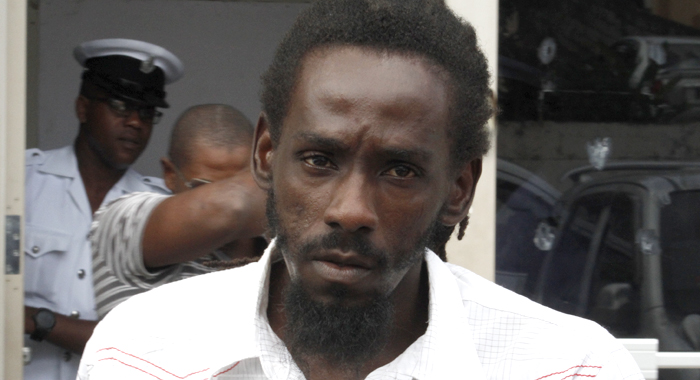 Recardo Bacchus has been jailed for burglarising two stores in Kingstown. (iWN photo)

A man who admitted to stealing EC$28,467 and US$1,450 in cash plus more than EC$30,000 in goods from two businesses in Kingstown last year was on Monday jailed for three years.

However, the man, Recardo Bacchus, will only spend a further two years and five months behind bars, as the seven months he has spent on remand have been counted as part of the prison sentence.

He had initially pleaded guilty to three counts of burglary when he appeared before Magistrate Bertie Pompey at the Kingstown Magistrate’s Court on Nov. 23, 2016, but his sentencing was deferred.

Bacchus was jointly charged with two counts of burglary along with Leon Samuel, and Kirk Williams of New Montrose and Sion Hill.

A fourth man, Allan Wilson, joined the three co-accused, charged with one count of burglary.

Bacchus pleaded guilty to the charge while his co-accused pleaded not guilty when they appeared at the Kingstown Magistrate’s Court on Nov. 23, 2016.

The men also pleaded the same way for this charge, when they appeared in court, on Nov. 23, 2016.

All four men were further charged that between Nov. 10 and 11, 2016, at Kingstown, they entered the Majestic Express building as trespassers and stole a number of items and EC$4,800 in cash, total value of EC$7,095.

When they appeared in court on Nov. 22, 2016, Bacchus pleaded guilty while his co-accused pleaded not guilty.

Sentencing in the matter was deferred until today.

The court heard that the crimes were committed after the owners of the stores had secured the business places, and, in the case of Fred J. Dare, the burglars entered via the roof.

Asked what he had to say before his sentencing, Bacchus told Magistrate Pompey,  “I was there but I had nothing to do with it.”

The court heard that of all the items stolen, only a bottle of cologne, and a pair of jeans that Bacchus was wearing when he was arrested were recovered.

The magistrate said that he took into account the accused man’s guilty plea, but said that this was the only mitigating factor.

He said that while the aggravating factors far outweigh the mitigating factors, he also took into account the seven months that Bacchus had already spent in prison.

He sentenced the man to three years in prison on each count of burglary and ordered that the sentences run concurrently.

“If you did not plead guilty, it would have been more severe, I assure you,” the magistrate said.