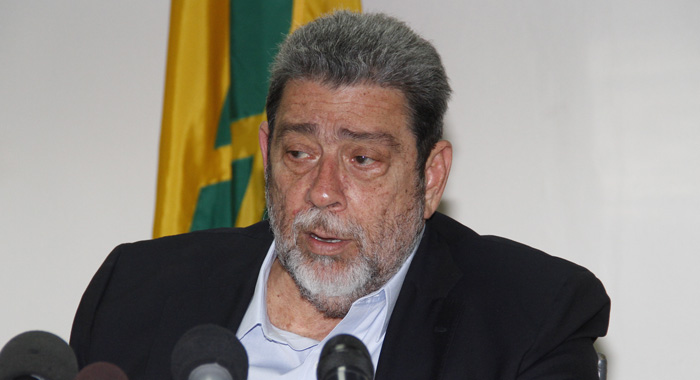 Gonsalves is expected to return home on Thursday from Grenada, where the meeting is taking place.

The meeting began Tuesday night and is scheduled to end Thursday evening.

In February 2013, Gonsalves’ mother was the subject of some public debate after it was revealed that two of his brothers had withdrawn EC$1 million from her account at the Building and Loan Association on Oct. 1, 2012, while the building society was under the supervision of the Ministry of Finance, which he heads.

The transaction was disclosed by then leader of the Opposition Arnhim Eustace, after a letter published by Luke Browne, then an employee of the Ministry of Finance, triggered a run on the BLA.

The development led to the Financial Services Authority (FSA) taking over the operations of the BLA.

Gonsalves said that he was not involved in managing the account held by his elderly mother, and said that his brothers had removed the money without informing or consulting him.

He said then that disclosure by Eustace was “an attempt by Eustace to politicise something and score a narrow political point in relation to a woman who is 93 years of age in a wheelchair, suffers from Alzheimer’s”.

The prime minister’s brother later redeposited some of the money they had withdrawn from their mother’s account at the hundred-year-old building society.

Meanwhile, Leader of the Opposition Godwin Friday on Wednesday expressed condolences to Gonsalves and his family.

“It is always a difficult thing to experience as a family member and I want to extend my sincerest condolences to the Prime Minister and his family, all the family and relatives in their time of loss,” Friday said.

He further said: “It is always difficult to deal with loss and illness and it affects us all. So, as one people, one nation, we must share in each other’s grief and in each other’s suffering.”