Controversy erupts as Shaunelle drops out of calypso finals 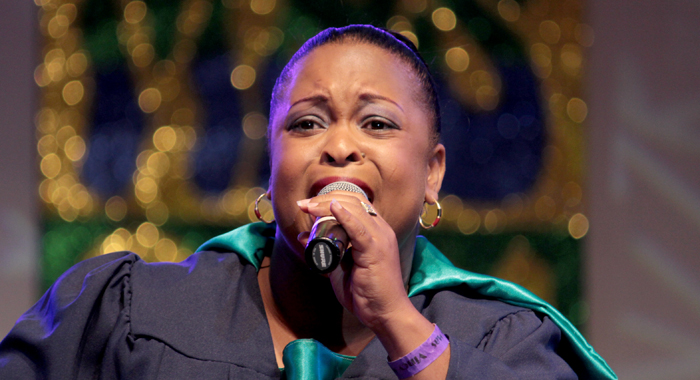 Controversy has broken out after the decision by seasoned calypsonians, Singing Shaunelle to opt out of the Calypso Monarch finals, slated for Sunday night.

The artiste, whose real name is Shaunelle McKenzie, was among the 10 finalists announced by the Carnival Development Corporation (CDC) after last Friday’s semi-finals to challenge the reigning monarch, Zamfir “Man Zangie” Adams.

Singing Shaunelle told iWitness News on Thursday that she will issue a statement soon about her decision.

“It is a bit of a personal matter. I will put out a statement very soon as I am still trying to get it resolved,” she said.

But spokesperson for the Calypsonians Association, Robert “Patches” King, who is a finalist in the competition, told iWitness News separately on Thursday that he has not been informed officially of the development.

He, however, said that he understands that some calypsonians are up in arms about the announcement by the CDC that Cleopatra Hendrickson will replace Singing Shaunelle in the finals.

The CDC did not announce any reserve artistes when it published the names of the finalists last Saturday morning.

King said that some calypsonians who made it to the semifinals were of the view that Cleopatra was being “thrust upon them without discussion”.

“It took everybody by surprise,” said King, who noted that no reserve artistes had been announced.

He said that he was told that some of the semi-finalists attempted to meet with the CDC about the matter but the meeting did not materialise.

King further told iWitness News that he was told that one calypsonian was shown the scores from the semi-finals and Cleopatra is reported to in fact be the bard with the 11th highest score.

He further said that another artiste, who was not among those who attempted to lobby the CDC, is reported to be was number 12.

The Calypsonians Association spokesperson, however, reiterated that none of this was officially communicated to him.

He said he has suggested that the Calypso Association convene an emergency meeting and attempt to discuss the matter with the CDC.

Meanwhile, two newcomers to the calypso arena are among a cast that includes six former monarchs who will try to unseat Man Zangie.

Shena Collis and Joanna Christopher this year moved from behind the back vocalists’ microphones to front stage and have made it all the way to “The Big Yard”.

All contenders for the crown will attempt to unseat Man Zangie, who is hoping to create history again but winning the crown for a fourth consecutive year, after completing an historic hat trick in 2016.

Skarpyon, Fyah Empress, Sulle, and Vibrating Scakes have worn the crown before.

Correction: An earlier version of this story wrongly said that Patches has worn the crown before. Further, Lil Bit won the Queen of Calypso and not the National Calypso Monarch crown.