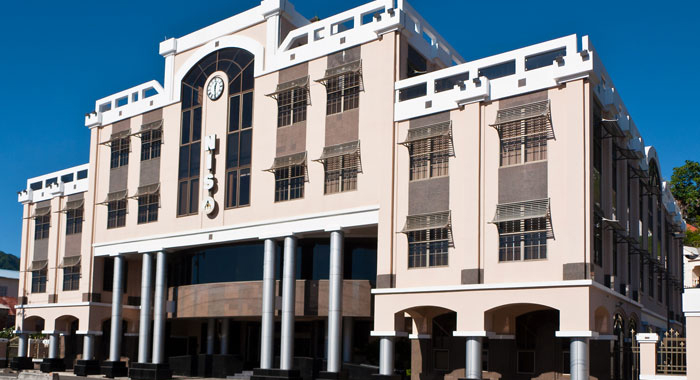 The opposition New Democratic Party has expressed hope that the National Insurance Services (NIS) will not finance the government’s EC$32.3 million repurchase of 31 per cent of the Bank of St. Vincent and the Grenadines.

Prime Minister Ralph Gonsalves announced the transaction on Monday, which comes seven years after his government had sold 51 per cent of the then state-owned National Commercial Bank, to Eastern Caribbean Financial Holdings (ECFC), which rebranded it Bank of St. Vincent and the Grenadines.

Speaking at an NDP press conference on Wednesday, Member of Parliament for East Kingstown, Arnhim Eustace, an economist and former finance minister, said that while some persons were celebrating, saying that the nation has gotten back the bank, that is not the case.

“We ain’t get back no bank,” said Eustace, who was opposition leader when the majority shares of NCB were sold.

“We enter into an arrangement where, later on, some other significant partner will buy shares in what we know as our bank, with a view to strengthening our bank’s operation, not only in terms of money but in terms of their ability to manage, whoever it is, financial institutions like banks.

“That is a very important distinction. But the way it is presented by the prime minister, it says simply this, the government recommits to divest — that means to sell again — in the medium term, a significant portion of the shareholding to other individuals and corporate partners.”

Eustace said that those corporate partners could be non-Vincentian entities, probably from larger countries of the region.

“I really want to know who is paying St. Lucia the $32 million for the shares that we are now buying back? What is the source of the funding for that $32 million?”

Eustace noted that the other big shareholder in the bank is the National Insurances Services — the state-owned social security agency.

“They have their shares, 20 per cent. I hope that the NIS is not the funding source for this $32 million that we now have to get to pay back for the shares.”

Eustace said he did not know what the funding source is and that it is important that that be known.

“The government doesn’t have a lot of money lying around somewhere to suddenly undertake a purchase of this type. And it is an immediate purchase.”

ECFH says it will invest in the Bank of St. Lucia the EC$32 million generated from the sale of the Bank of SVG shares.

The development comes as the ECFH moves away from an amalgamation track and seems to be focusing on making the Bank of St. Lucia more viable.

Eustace further said that it is not known how long it will take to get back to the amalgamation stage.

“We don’t even know how long it will take to get the partner in the bank. So, in a sense, we are almost ending up where we started and I have my own doubt and my own concerns,” Eustace said, noting that the nation already has to repay an EC$100 million loan taken to shore up the NCB before the majority share was sold in 2010.

“Now, we are trying to find another 32 million.”

He further noted that 5,000 persons in St. Vincent and the Grenadines hold the other 18 per cent of the Bank of SVG shares.

“So a lot of people’s lives and fortunes are involved in this exercise and it must be taken extremely seriously and I believe the Central Bank, of course, recognises this, and that’s why they have been involved in the development of this whole process that is taking place now.

“All this talk about masterstroke that we had in 2010 means nothing… the practical consideration is how we finance the repurchase and how the institution is managed over the period until you get back again to an amalgamation stage. And I am very unclear about that,” Eustace said.

He noted that the government had not paid into the NIS, the 23 million it had withdrawn from workers’ salaries, then, after the situation became public, issued the NIS an EC$15 million treasury note.

Eustace said the NIS is yet to receive the EC$8 million that was outstanding.

One reply on “Will NIS money buy back bank shares?”